The Changeling – The Skull

I’ve now covered the interesting things to do with the hand and the foot of Wulatelong gobiensis. There’s not much there to the rest of the body (there’s the pelvis, which is nearly complete, but that’s the next post), but now I move on to the skull, and a quandary.

“Normal headed” reconstruction of Wulatelong gobiensis Xu et al., 2013. Grey areas of the skull describe the minimal extent of the skull as preserved in the nodule of sandstone, but not its possible preserved extent. [Skeletal diagram is CC-BY: You are free to distribute, modify, and otherwise mess with this illustration, so long as any presentation of this cites me as the original source.]

If the Skull Fits

When I first began to produce a skeletal for this taxon, thinking that it was reasonably complete this shouldn’t be a problem (I mean, nearly complete legs, some bits of tail and spine, arms, a hand, even most of the skull, it was good!) but I quickly noticed a problem. The original paper gave out several measurements for the hands, feet, and pelvis, but omitted several others, especially any measurements for the skull; and no scale bars were added to figures, so even tentative estimates couldn’t be made.

The skull was associated with the skeleton, but not described in what manner, and is shown in its own separate block. I emailed Xu Xing, and got a prompt reply: the skull is from tip to caudal end of the distal quadrates 115mm in length. Now, this is fairly small, and barely larger than the holotype skull of Conchoraptor gracilis (~100mm). It is also fantastically undersized for the body it is attached to, an estimate made by comparison to other oviraptorids:

The ratio of skull length to iliac and femur length (two measures that may be constrained in oviraptorids and other derived oviraptorosaurs) were drawn from Fanti et al. (2012), who presented a wonderful table for oviraptorid skeletal measurements (previously noted here). For oviraptorids, the skull is always shorter than the ilium or femur (and the femur longer than the ilium — except in Heyuannia huangi, in which they are quite close); the ilium ranges between 145-175% the skull length, while the femur is 160-180%. Taking the skull and estimating the ilium and femur length provides measures of 167 and 203mm when using basal “oviraptorine” oviraptorids like Rinchenia mongoliensis, but 201 and 207mm when using “conchoraptorines” like Khaan mckennai. Both of these numbers are significantly smaller than the actual iliac and femoral lengths of 225 and 255mm, indicating that either the taxon presents a vastly undersized skull for its size, or a large hip for its size (possible), or the skull is from a different, smaller specimen. These measures also predict proportions among the ilium and femur which differ from the actual specimen, but nonetheless fall within the range (78%-102%) for ilium:femur lengths among oviraptorids. The estimate of i:f range is similar between Wulatelong gobiensis and Nomingia gobiensis (88.2% vs. 86.4%).

This data suggests to me that the skull probably doesn’t belong to the same specimen, especially when considering that the relative length of skull to body size increases when moving basally: the longer jaws relate to larger skulls in caenagnathids, and appears to be the case in Oviraptor philoceratops (note, for example, the large size of the skull). 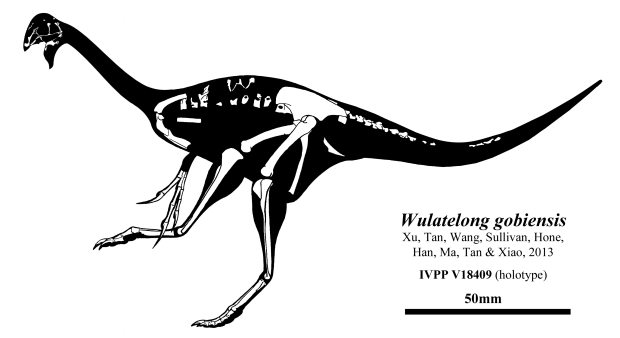 “Shrunken head” version of Wulatelong gobiensis Xu et al., 2013, with skull shown at preserved size. [Skeletal diagram is CC-BY: You are free to distribute, modify, and otherwise mess with this illustration, so long as any presentation of this cites me as the original source.]

I wouldn’t spend so much time on this taxon if it weren’t so interesting, its implications fascinating. Of these include its import on the phylogeny of oviraptorids, which as a potential most-basal taxon can be dramatic. For example, it allows us to make assumptions about the basal condition of caenagnathids, and thus how to evaluate the caenagnathid characters of various phylogenies.

When the skull is taken into account, there is much to say.

Xu et al. diagnosed Wulatelong gobiensis in part on the basis of several characters that occur in basal oviraptorids, but not other oviraptorosaurs:

When dealing only with the skull, only characters 1-6, 11 and 13 are relevant; of them, several of these characters are definite oviraptorid characters, and it is left undenied the issue of whether this specimen (either the skull alone, or together with the postcrania) is an oviraptorid. But their quantification will be left to the next (and last) post.

7 Responses to The Changeling – The Skull