The Best Little Oviraptorid in Mongolia

The sweaty summers of the mid 1970s give way to cooler climes indoors, as a block of sandstone pulled from the red-and-orange rocks of the Djadokhta Formation in Mongolia’s southern Gobi Desert finds itself in Ulaanbator, the nation’s capital. Initially discovered during one of the joint Russian-Mongolian expeditions into the Gobi Desert, by a team including such notables as paleontologists Ivan Efremov, Rinchen Barsbold, the discovery was but one of the first of oviraptorosaurs in Mongolia, after a long gap since the recovery of the type specimen of Oviraptor philoceratops in 1923.

In the halls of the Geological Institute, the specimen would be extricated carefully, and then over the course of the next few years, painstakingly prepared. It would become the best preserved and freely-prepared oviraptorid skeleton (including skull) known. There are better oviraptorid skeletons now, and more complete. But none of them are mounted, or those that are mounted composed for multiple specimens, or are artificial. Originally labelled GIN (SPS) 100/42, the specimen was first attributed in late 1970s publication as Oviraptor philoceratops, but Barsbold would later express concerns over this assignment. Still, the label stuck and remained so until the mid-1990s, when new fossils recovered from the Djadokhta, at Ukhaa Tolgod, suggested that oviraptorid diversity had been staggeringly underestimated. And so that diversity increases with new finds from Mongolia and China. The specimen would be considered related to Citipati osmolskae, although not a member of that species, and thus earns the provisional name of “Citipati sp.” The specimen’s label has also received a facelift, when the Geological Institute of Mongolia changed its name, and thus its abbreviation, to the Mongolian Paleontological Center, or MPC. The specimen would become MPC-D (“d” for “dinosaur”) 100/42.

Fully mounted, it is the largest mounted oviraptorid known, and the most complete. Until the Hell Creek oviraptorosaur (Anzu wyliei) was mounted by Mike Triebold and his associates, it was the largest oviraptorosaur mounted. Eventually, after cursory description by Rinchen Barsbold in 1985, the specimen would be set upon a course it has never left, a world tour. Since then, intercepting the specimen takes time, and care, and study of it is limited. Photographs provided to me of this mount at varying angles produced a decent skeletal which, at the time, I thought I had a perfect handle on.

However, many years later, painstaking care in measurement and photography has yielded better study, and the publication of a table of measurements of key elements by Federico Fanti and colleagues (discussed here and here) and some more photographs, thus was I able to better improve the illustration. Proper scaling, for one, was a must. Skull length and arm length were one thing, but estimates of leg and spine were problematic. A fix on the leg proportions aided by exact measurements, but still the vertebrae were off. These remain estimates, but the result is better barring element by element measurement, something that is currently not possible due to the constructed arrangement of the mount.

Importantly, some details of the vertebrae, ribs, gastralia, are estimated, or interpolated from other oviraptorids. But for such an early find, typically poorly preserved, many details are present that elucidate shapes of key elements.

One major thing I note that in reconstructions of oviraptorid pelvises is demonstrated here: The pubis is often either shown highly reversed, swung backwards, or not at all. In caenagnathid oviraptorosaurs, the pubis is slightly curved, but for the most part is relatively straight or has a slight S-shape; but in oviraptorids, it is very much C-shaped, concave on the front. This influences the aspect of the pubis: the proximal portion is very “opisthopubic”, but the distal portion lies below the pubic peduncle of the ilium, or slightly in front of it, and would qualify similar to orientations of many “propubic” theropods, such as ornithomimids. This morphology, of striding between both worlds, might be termed “mesopubic,” were it not for the very C-shaped middle section. A quantification of the orientations of sections of shaft and the relationship these parts have to the limb muscles and gut might serve us better than hand-waved ideas of pubic orientation based on general properties of the bone. Here, the very clear posterior inclination of the pubis lends the gut an expanded aspect, and likely the femoral muscles that attached to the pubis would have been further posteriorly positions than even in some dromaeosaurids with reversed pubes. Despite this, the gastral basket is short, the chest very deep, and there are many things to think about how this affected breathing, gut shape and components, postcranial pneumaticity, etc. Herbivory vs carnivory, you get the idea.

I was keen on doing many things cleaning up the proportions of the skeletal. This is, after all, a skeleton I would love to describe in full.

The skull is especially tantalizing for its familiarity. For many decades, this was the face of oviraptorids. While until the late 1980s, and sadly some iterations thereafter, including from the inestimable John Sibbick, oviraptorids were known from the “horn-nosed” butchered face of Oviraptor philoceratops — a defect of its preservation. MPC-D 100/42 provided a unique twist to this tale, a large hatchet-shaped crest. A relative, now called Rinchenia mongoliensis, bore a salad plate for a crest. Diversity mimicked hadrosaurs. Since then, even more cranial diversity has been accounted, and it should only increase as new specimens are discovered, or existing, known ones described. 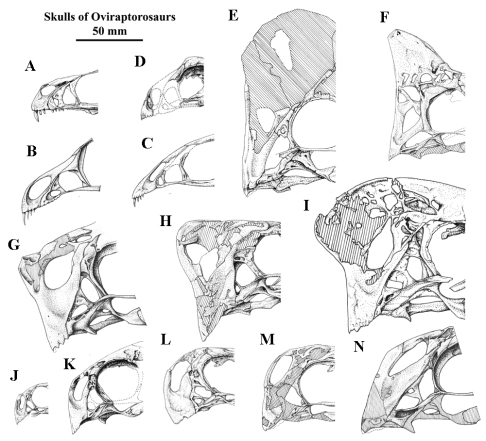 There’s really quite the diversity.

But it’s not been enough to simply talk about skulls and bones, and what not. I like to reconstruct beyond that. 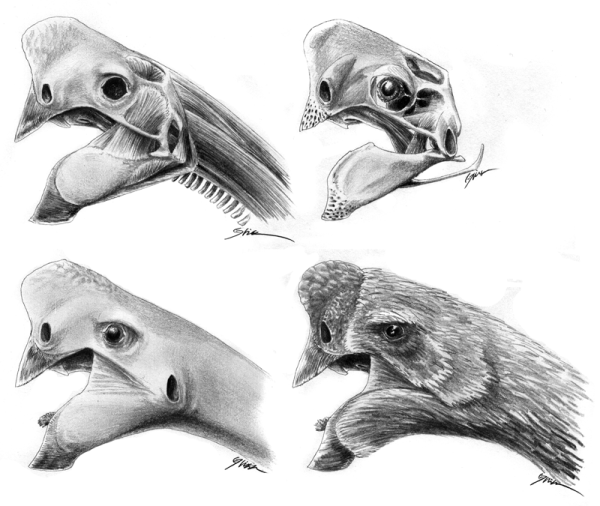 Head tissues in various degrees of reduction — or expansion, depending on how you look at it. The oviraptorid skull deserves far more in depth study than it has been given, and while it has been given a lot, it’s not enough. The distribution of soft-tissues within and outside the skull are important, and there are several very interesting and very unique (when not talking about birds) features of the skull that deserve discussion. For instance, the unique convolution of the nasal pathway in the skull, and whether or not the skull is actually flexed downward in front of the eyes. There’s something that I’ve been meaning to get around to, but fortunately, Mette Aumala beat me to it, and that’s the issue of the eyebrow in birds. It’s actually based on a soft-tissue that most sauropsidans possess, and in birds and crocs is involved with the palpebral ossifications, or bony extensions from the soft-tissues that overlie the eyeball. There’s just such a large number of things to tackle here. Like, the size of the auricle, the shapes and position of the fleshy nostril, the arrangement of the muscles in the skull, the complete and utter lack of vertical leverage of the muscles at the back of the skull, but the very good lateral leverage; what all this has to do with diet. Even more recently, a paper published by New York IT College of Osteopathic Medicine’s Robert Hill and colleagues discussed the unusual preservation of the hyolingual bony apparatus, the structure that supports the tongue and throat in tetrapods, in a juvenile ankylosaurids. This led to identifications of the known and described elements as they related to actual sauropsidans, rather than generalizing their similarities. More complete structures in other dinosaurs should reveal more certain arguments about their relationship to the muscles that form the tongue and floor of the throat, none of which have received much attention. Here, I’ve drawn the tongue of the oviraptorid is a short, powerful, and altogether too-parrot-y structure, but no implication for a bony paraglossal bone. Absence of this doesn’t indicate its absence, and even in the remarkable preservation of the Gobi, from whence Hill et al.’s specimen derives, we may still not find all the bony bits of a skeleton we look for. But it would be nice…

5 Responses to The Best Little Oviraptorid in Mongolia