The Changeling – The Hand

Wulatelong gobiensis is based on a partial skeleton (IVPP V18409) including a skull, but with poorly preserved vertebrae including most of a tail, the dorsal series and presumably the sacral (buried beneath the ilia), and missing the neck. There are only a few ribs. The arms are incomplete, and the right leg is either buried in the matrix or missing, but the left leg is virtually complete. The skull is missing the dorsal bones (parietal, frontal, nasal, dorsal half of premaxilla and the anterior margin, and much of the ventral margin of the mandible. The specimen derives from the region of Bayan Mandahu in Neimongol Autonomous Region (Inner Mongolia) in China, in a subregion known as Wulate (乌拉特) Huoqi. The femoral length is estimated (nearly complete) to be 255mm, which gives the animal a relatively estimated body length of 1.6m; vertebral neurocentral fusion suggests close to adult size. 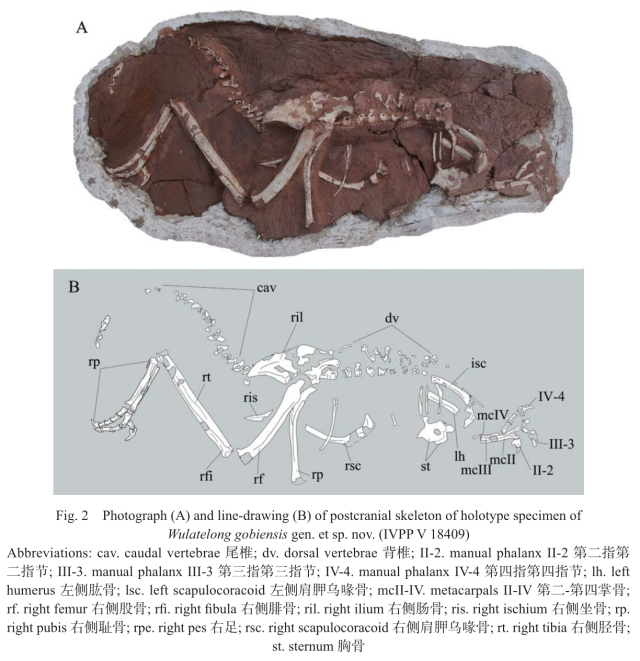 Skeleton of holotype of Wulatelong gobiensis, from Xu et al., 2013. Skull not shown.

IVPP V18409 is the third oviraptorid specimen described from Bayan Mandahu. In 1996, Dong Zhi-ming & Phil Currie described a partial skeleton, IVPP V9608, of an oviraptorid from Bayan Mandahu lying above a group of elongated, elongatoolithid eggs; eggs which further were found to derived from oviraptorid theropods (Norell et al., 1994) with the discovery of a second nesting oviraptorid (Norell et al., 1995, Clark et al., 1999; but see here, where these specimens are noted to be the second and third discovered “nesting” oviraptorids). Dong & Currie referred the specimen to Oviraptor philoceratops. The second oviraptorid from Bayan Mandahu is IVPP V15979, which Nick Longrich and colleagues named Machairasaurus leptonychus, and consists of a partial forelimb. Longrich et al. (2010) further mention another oviraptorid skeleton, IVPP V15980, but do not describe it as it has not been prepared; it apparently shares pedal morphology and “robusticity” of the manual phalanges with the holotype. These authors also distinguished IVPP V9608 from Oviraptor philoceratops on the basis of the relative proportions of the manual phalanges; Xu et al., when describing Wulatelong gobiensis, refer to the absence of “lips” above the proximal articulations of the manual unguals, which are present in IVPP V9608 and IVPP V15979. Thus, they indicate that there are at least three potential taxa present. Longrich et al. (2010) further mention additional specimens from Bayan Mandahu, comprising a partial jaw and vertebrae, but these have also not been described. The current specimen was collected during the 2009 expedition from the IVPP, and the other specimens were collected during the Sino-Canadian expeditions of the late 1980s-early 1990s.

Specimens from Bayan Mandahu are incomplete; IVPP V18409 is the most complete specimen, so far, while other specimens are far more incomplete. And non have skulls, except IVPP V18409. These specimens are primarily distinguished among authors on the basis of their forelimb anatomy, as other portions are not comparable. Machairasaurus leptonychus was the first oviraptorid named from Bayan Mandahu (Longrich et al., 2010), whilst previously IVPP V9608 was referred to Oviraptor philoceratops, but which had been named on the basis on another specimen, from Bayan Zag in Mongolia (Osborn, 1924). The overlap amongst these specimens is not significant, and so the manus remains the only material that may be used to comforably distinguish them. This is all with the caveat that these are all based on single specimens, without any data to demonstrate variation in particular features.

Edit: I realized I’d left the other Bayan Mandahu oviraptorid out, so it is now included in the figure below.
Edit 2: As are now the descriptions of the characters noted by numbers in the figure.

Other apomorphies of selected taxa:
22. Interphalangeal joints of phalanges much broader than diaphyses of phalanges;
23. Carpometacarpal fusion (possibly ontogenetic);
24. Phalanges 1 and 2 of manual digit 2 of relatively even length.

Machairasaurus leptonychus is notable in that the holotype is significantly smaller than IVPP V18409: the length of the second metacarpal (MCII) in IVPP V18409 is ~76mm long, while this bone in IVPP V9608 is (at minimum, as it is incomplete proximally) 69mm, but in IVPP V15979 MCII is 47.5mm long. While expansions of the dorsal edge of the proximal articular surfaces of the manual unguals (frequently termed “lips”) are present in the two larger specimens, this feature is variable in Khaan mckennai as the pollex ungual lacks the “lip,” but it is present in the other unguals (Balanoff & Norell, 2012), while in Oviraptor philoceratops all unguals bear the feature. This may be ontogenetic, in which the raised lip functions to provide a greater moment for extension of the ungual. “Lips” are always present in caenagnathid unguals, but tend to vary more in oviraptorids, and the morphology of the unguals in the flexor tubercle and the position of the lateral groove differs, with caenagnathids possessing a Y-shaped groove that bifurcates near the flexor tubercle, and with a more distally-placed, and larger, tubercle than in oviraptorids. The tubercle may be large in the pollex ungual, but tends to become very small in the smaller unguals, especially of the third digit. In Wulatelong gobiensis, the unguals have a “typical” oviraptorid look, but lack the strong curvature seen in Citipati osmolskae, MPC-D 100/42, or even Elmisaurus rarus.

Nonungual phalanges in Machairasaurus leptonychus are also relatively more robust than in Wulatelong gobiensis or IVPP V9608. Xu et al. (2013) argue that the relative lengths of MCII between IVPP V9608 and IVPP V18409 differ, but in the former the specimen is not complete and may be as long as in the holotype of Wulatelong gobiensis. If this is so, the only real stated difference between the two specimens is removed. Phalangeal proportions do differ between them, however: ratios between proximalmost manual phalanges (mdI-1, mdII-1 and mdIII-1) can differ between the two specimens by as much as 25%, but always more than 10%, and proportions between I-1/II-1 and I-1/III-1 are higher in IVPP V18409, while II-1/III-1 it is lower. It is thus possible that these represent different taxa. If so, then, there may be as many as three different taxa at Bayan Mandahu, each relatively distinct from the Bayan Zag and Ukhaa Tolgod faunae, and thus suggesting that even amongst the Djadokhta-equivalent beds, the taxa show remarkable disparity. 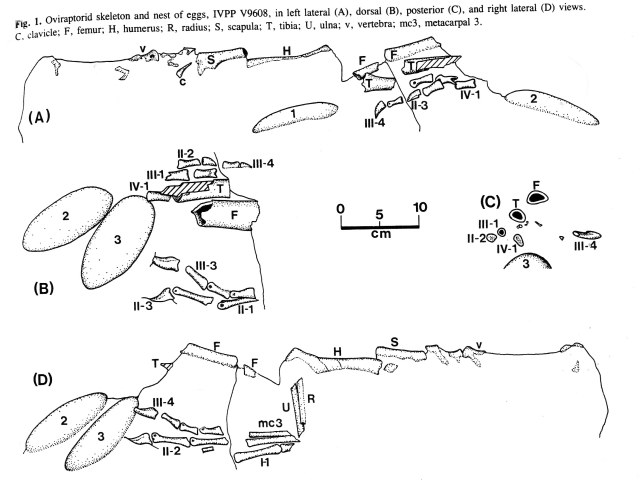 The unnamed Wulansuhai oviraptorid, IVPP V9608. From a photocopy scan in Dong & Currie, 1994. Manus as preserved is missing the proximal end of the metacarpals, carpus, and ungual of digit 1.

The hand is not completely preserved in IVPP V18409. The proximal ends of the metacarpals are missing. But the preserved portions of the hand show that the third metacarpal did not extend as far as the second, and this is similar in length to the first metacarpal. This is very unlike the condition in all other oviraptorids, but is similar to that in caenagnathids. Similarly to caenagnathids, the proportions of the nonungual phalanges in digit 3 (mdIII-1, 2 and 3) are all very nearly even, while in oviraptorids (like in troodontids and dromaeosaurids, Archaeopteryx lithographica and Anchiornis huxleyi, certainly the “basal” condition) mdIII-3 is much longer than mdIII-1 or 2. What this suggests is that the manus of Wulatelong gobiensis is very, very caenagnathid-like, and thus quite different from Machairasaurus leptonychus, Oviraptor philoceratops, Citipati osmolskae or Khaan mckennai, the other Djadokhta-equivalent oviraptorids.

Andrea Cau noted in the comments of my last post and in his own review of Wulatelong gobiensis that the specimen makes for a perfect intermediate between the caenagnathid and oviraptorid morphologies. Phylogenetic taxonomy provides constraints on what should be referred to a given taxon by use of a taxon-based definition, and in this case, Caenagnathidae and Oviraptoridae are opposing stem-based clades within a node-based clade Caenagnathoidea: Any caenagnathoid must be either a caenagnathid or an oviraptorid, and there can be no non-oviraptorid, non-caenagnathid caenagnathoid. As stems, the taxa are rooted (typically, but not always, for some clades) on the nominative taxon, in these cases Caeangnathus collinsi Sternberg, 1940 (X) and Oviraptor philoceratops Osborn, 1924 (Y). The parsing for these definitions follows the formula X + Y, X > Y, or X < Y; additional elements may be added to further refine or exclude taxa from a definition. But with these definitions, when phylogenetic analysis recovers Wulatelong gobiensis closer to Oviraptor philoceratops and other oviraptorids than to caenagnathids, despite the enormous similarity of its foot and hand to caenagnathids, we must conclude it is a member of Oviraptoridae. But not all oviraptorids look alike, and what we end up with seems to be a Hennigian “comb,” with serially more and more basal groups from the “core” oviraptorids. We’ll get to that next, along with the skull.

3 Responses to The Changeling – The Hand