Discussing body posture and its artistic expression has had me going back and revising my reconstructions. It has led to something of an exploration in the artistic presentation in what we see based on our expectations. You see, we are raised thinking our dinosaurs (in this case, Majungasaurus crenatissimus) should look something like this: 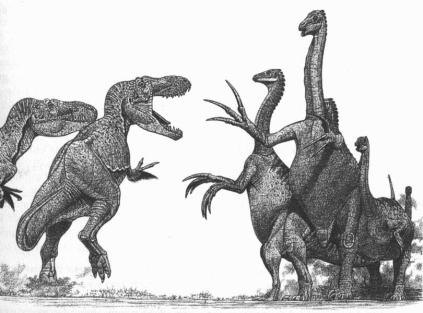 Greg, in all his influences, has become a major name in the illustration of fossil flesh. But the image ahead is surprisingly subject to errors. While this is a factor of the time it was made, and Greg has modified it since (the original lacked the little “wings” on the tyrannosaur arms, almost certainly absent simply due to the ludicrous lack of functional utility), several issues remain, especially the “bunny hands” of the therizinosauroids on the left, and a presumption that the arms were able to strictly fold avian style, despite rather unique brachial anatomy.

Fixing anatomy means we also have to look at the likelihood of biology, and the constraints extant organisms might place on our plausibilities. If we presume, for example, that theropod dinosaurs have feathers, we could presume that large ones have them, but the tendency is for artists to draw a frill down the top of the spine, or make some sections of the body feathered or fluffy, but not others, a “halfway” point without any evidence such a condition would arise.

I talked about posture in my last post, and about how evidence supports the idea that theropod dinosaurs (and indeed all dinosaurs) could have held their bodies in a different manner, often with crooked elbows and crooked knees, and their limbs were hardly ever vertical. Take Carol Abraczinskas and Paul Sereno’s reconstruction of Jobaria tiguidensis from the original nominative paper (Sereno et al., 1999):

The reconstruction is unusual because it purports a crouching hindlimb, and a “stable” forelimb not placed in the vertically upright posture you see elsewhere. But is it realistic? What biomechanics support the model? It may seem there are more and more potential ways this model can be more accurate than the body types above. 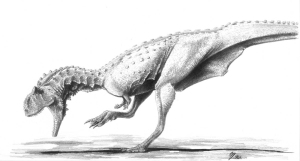 An old illustration of mine, depicting Carnotaurus sastrei. (The head is waaaay too big.)

Here I slimmed the body, made it ultra gracile, and literally stretched the skin over the muscles and added wrinkles. This is a bird with scales and a hefty, toothy head. But it’s probably extremely unrealistic, and certainly not how I would reconstruct it today. Most certainly, notice the thigh, where the femur and tibia practically form a straight line, or where the iliofibularis muscle is simply not present (this muscle helps define the upper lateral calf in side view, and is apparent in birds, crocs, and what have you). This is, most likely, impossible. The reconstruction is outdated, and with increasing new information coming from workers such as John Hutchinson in assessing biomechanics of locomotion, Heinrich Mallison in total body photogrammetric approaches and locomotion and posture reconstruction, Scott Persons and more of his as-yet not fully published Masters thesis on tail reconstruction, and the thermoregulatory elements of biomechanics from people like Vivian Allen and David Carrier. 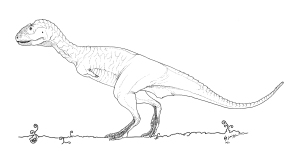 A modern reconstruction of Carnotaurus sastrei.

A newer reconstruction here presents more updated information, with a protracted static femur (not so apparent unless I push this posture into a running one), less definition of the posterior thigh (and better definition when plausible within the thigh and at the calf), a smaller more accurately sized head, and so on. The animal is still wrinkly. But it seems likely, at least, that a less aggressively broad-stanced animal should be favored over a svelte, sleek machine of birdiness. It takes the birdiness of theropods too far, in my opinion, and we should understand that some of these animals likely remained croc-like in many attributes of their appearance and in some cases their posture, regardless of being bipedal.