My, What Weird Teeth You Have!

Notosuchia is an odd group of crurotarsans, basal to the group of crocs including the modern forms and their earstwhile “croc-like” allies, or crocs that actually look like livign crocodilians to today. These are small to large crocs with often short snouts, large and few teeth, and highly heterodont dentition including rounded, bladed, leaf-shaped, or even chisel-like teeth; they will have either upright seeming limbs as predators, or shorter, robust limbs as herbivores and foragers.

Notosuchians are generally small, but they seem to develop a large range of ecological niches, from terrestrial herbivorous foragers (Simosuchus clarki Buckley et al. [2000] and Comahuesuchus brachybuccalis Bonaparte [1991]), fleet-footed carnivores (uruguaysuchids like Araripesuchus wegeneri Buffetaut, 1981), or even durophages (like Candidodon itapecuruense de Carvalho & Campos [1988]). They all seem to have bizarre teeth, and can be identified on small fragments of jaw simply because of this oddity.

The latest version of odd teeth in a croc comes (also) from the Cretaceous of Brazil, from whence virtually all other fossil crocodilians must seem to derive! This form, named Labidiosuchus amicum (well-liked forceps croc), joins a range of new taxa named in connection with the 1st Symposium on the Evolution of Crocodyliforms (a symposium of the Third Latin American Congress of Paleontology, held in Neuquén, Provincia de Neuquén, Argentina), in a recent issue of the journal Zoological Journal of the Linnaean Society, published by Elsevier and made freely available here. The new taxon is Labidiosuchus amicum, or “well-liked forceps crocodile”. [n1] It was collected at the Peirópolis Palaeontological Site at Minas Gerais State, Brazil, in the Marília Formation, Maastrichtian, Upper Cretaceous.

This croc is based on a partial pair of dentaries (DGM 1480-R) of a particularly small animal, with a reconstruct skull length of about 14cm, and thus implying an animal just over a meter in length. The jaw includes a large, anteriorly-placed external mandibular fenestra (characteristic in the notosuchians), and a symphyseal region of the jaws strongly adhered to one another and where all the teeth of the jaw are restricted to this region. There’s a broken area behind the preserved dentigenous region and the hints that dental alveoli proceed into this gap, implying that the preservation of teeth is less than what are likely preserved. 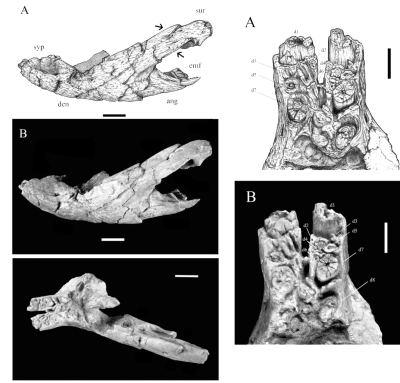 Preserved mandible of DGM 1480-R, holotype of Labidiosuchus amicum, modified from Kellner et al. (2012). On the right, numbers in A refer to preserved teeth of the left dentary, and in B to the right dentary. Arrows in A on the left side refer to the contact margins for the surangular, which forks anteriorly around a single posterodorsal process of the dentary. Scale bars all equal 1 cm.

The left jaw preserves seven teeth, and the right eight. Almost all of the teeth are broken at the alveolar margin, with only the eight right crown actually fully preserved.

There are four distinct groups of teeth, though some blend into one another:
1. Rostral, conical teeth; the typical “crocodilian” morphology.
2. The first and fifth crowns are very large, and the first has the largest circumference of all other crowns, implying it is also the largest. This crown is oriented rostrally and almost horizontally (as in many notosuchians), and likely fit between the first two maxillary “caniniform” teeth (also as in many notosuchians).
3. A small cluster of seemingly-conical teeth in between two much, much larger teeth. Kellner et al. (2012) calls this a “battery,” where these little clustered crowns (forming an irregular array in alveolar view) seem to be there … accidentally. I wonder if these teeth are there due to a defect, rather than a natural, selected-for option.
4. The last tooth on the right ramus is a special, semi-conical crown with a broad step on the lingual and distal surface, with a high cusp on the mesiolabial edge of the crown. This morphology is (probably) what most of the more posterior teeth looked like, and is certainly reflective of a semi-durophagous, crushing function for the posterior crowns.

Despite the limits in preservation the jaw indicates a relatively unique form. Kellner et al. (2012) used the morphology of the teeth, their number, their strong restriction rostrally, and the form of the dentary/surangular contact to diagnose the form. Most unusual is the form of four or so small, clustered teeth between the two largest rostral teeth. They form an irregular array, and some are positioned on the furthest lingual side of the conjoined dentaries, while others seem to be in their “normal” positions. These appear to me to be supernumerary defects, although it is possible that, as in some other archosauromorphans, it reflects irregular clustering of palatal teeth; contrariwise to typical supernumerary defects, each of the teeth is present in its own alveolus, up to and including thin septa dividing them from one another. While their presence is unique, the authors say very little about them. They note that unlike many other non-neosuchian mesoeucrocodilians, the mandibular symphysis is fused at the dentary and for almost the entire length of the preserved tooth row. The rostral end of the jaw is turned upwards from the horizontal, which gives the authors the appears of one arm of a pair of forceps, hence the name.

Labidiosuchus amicum represents one of a large, very large number of small, large-headed, small-snouted crocs typically referred to as Notosuchia. There is a lack of consensus as to what constitutes the Notosuchia, as it sometimes doesn’t include Uruguaysuchidae (including Araripesuchus wegeneri, Sereno’s “dog-croc” [see Sereno & Larsson, 2009]), or whether the Notosuchia is restricted from the Sebecosuchia, including Baurusuchidae (Pol & Larsson, 2012, summarize this in their editorial introducing the special issue in which Labidiosuchus amicum is named).

Summary of current points of agreement and disagreement on the phylogenetic relationships of Crocodyliformes based on recent phylogenetic studies (after Pol & Larsson, 2012).

I’ve generally been moot about the diversity offered by Notosuchia because, frankly, I am less acquainted with them than I should be. I have been attempting to rectify this in recent years, but for the most part this is due to an inordinate interest in published works in assessing their phylogeny, by focusing on their braincase anatomy. The rostral region and mandible are also useful, but less well-known save as descriptors of how weird their jaws are, or how diverse their ecology. But for me, that is the point. Expect more of a survey of notosuchians, which by far range the gamut of diversity in Crurotarsi save for the armored aetosaurs or the aquatic thalattosuchians.

[n1] The second name refers to the actions of a few groups to preserve the site from which the holotype was collected at the sub-locality of Serra do Veadinho, part of the Peirópolis Palaeontological Site, and its strict meaning of “friendly” may be shifted to mean “well-liked.”

This entry was posted in Paleontology, Science Reporting and tagged Crocodilians, notosuchians. Bookmark the permalink.

1 Response to My, What Weird Teeth You Have!