Today I step away from something that has occupied my life for … over two decades now. I have no idea if I will ever return. It saved my life when I needed it to, and stepping away is almost as healthy. Paleontology (or for you Europeans, palaeontology) and the study of anatomy and biomechanics has been something I have wanted and explored but have had little in the ways of pushing myself through, given the vagaries of life. For half a decade I raised my sister and kept her safe, and for much of that time I explore my art as best I could; and all this while battling often crushing depressive lows and few highs. 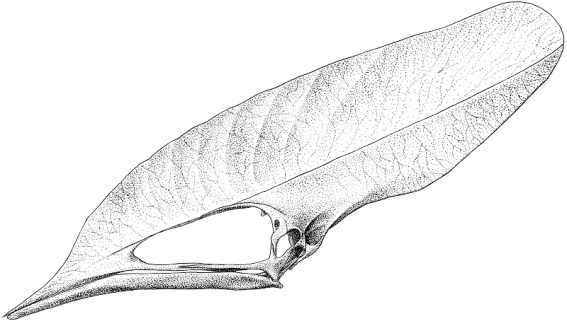 To grace the pages of a publication of description of a nearly 2m pterosaur skull. So much about this skull…

Today, I break certain things in order to preserve myself. I leave projects unfinished. Until a few days ago, these were intended to remain viable projects. They may still be. The information and data is available for others to pick up if they should need them, and I am not just walking away from everyone. But I cannot maintain what I had begun, and I certainly cannot finish it at this time. Left are projects concerning jaw muscle reconstruction and the bite properties of oviraptorosaurs, a phylogenetic perspect of them; of the skull of a ornithocheiroid (Cearadactylus sp.) which promised to elucidate details obscured by artifice in the holotype of C. atrox; anatomical rconstruction from the ground up on various sauropsids and how to best infer the anatomy of fossil “reptiles,” including dinosaurs, from everything including how to derive the body shapes and muscle positions, and how to infer whether cheeks are present, what to do if they were, etc.; and my most problematic project, helping describe the skull of Thalassodromeus sethi, from which came by first, and only, published paper on Banguela oberlii. 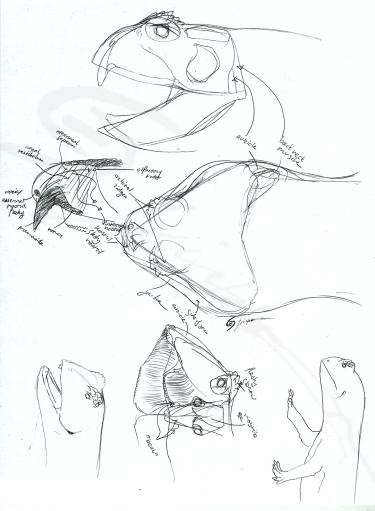 Some really ugly sketches on working out shapes and models for rhynchosaur faces.

Left are contacts and potential points of growth and the desire to study in anatomical colleges. Left especially were the hopes to work with persons who I had followed since the middle and late 90s whose philosophical practices I found to be the most sound, like Larry Witmer, John Hutchinson, Andy Farke, and more. Part of this is my problems writing, seen on the pages of this blog, missing from the months of struggle it took to write certain things, including the paper I wrote. I work best amongst, but not on my own, and the fight is too much. 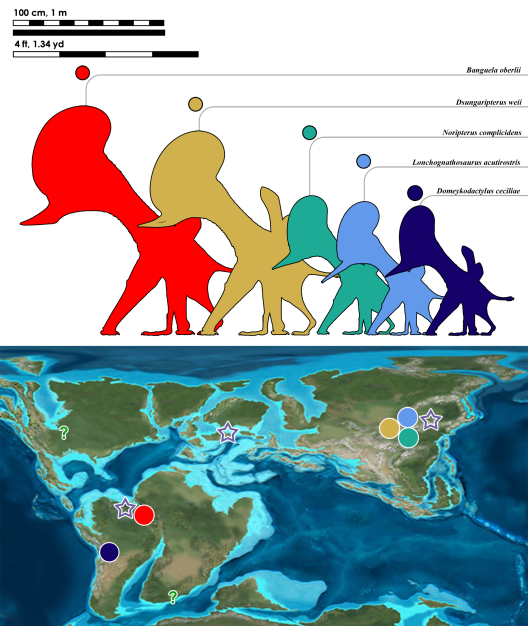 Missing from the Banguela oberlii paper was a discussion on the biogeography of the specimen — if it were a dsungaripterid. This figure was meant to show both the distribution of *confirmed* dsungaripterids, and their body sizes. Banguela oberlii is larger than Dsungaripterus weii, but that is based principally of the few skeletal materials known. “Noripterus complicidens” is based on the slightly larger Dsungaripterus parvus (= “Phobetor”) specimen coupled with Lü et al. 2009’s newer specimen indicating synonymy. (Lonchognathosaurus acutirostris may also be synonymous, but differs in some respects.) The map is courtesy Christopher Scotese, used with permission. Stars indicate other potential dsungaripterids, including partial fragments from Romania, and the potential identification of Santanadactylus spixi as a dsungaripterid.

But this isn’t really goodbye. I am mothballing the blog, and that means promised things won’t be happening for a long, long time; if ever. Just a few days ago, I was still wanting to tie in rhynchosaur faces to Moloch horridus. The two bear so many similarities it was the basis for the ornate orbital features and rounded faces, building from the prospect that the orbital rim supports extensive soft-tissue, as it must, and that the confluent external bony nostril probably supported diplodocid/primate-like external fleshy nasal tissues, which don’t even need mammal references to infer as we possess monitor lizards and various other sauropods (especially turtles) to suggest these features. The flat “alien nose” just doesn’t fit. I prepared some drawings, even plugged one up on Redbubble. But they are not interesting enough. 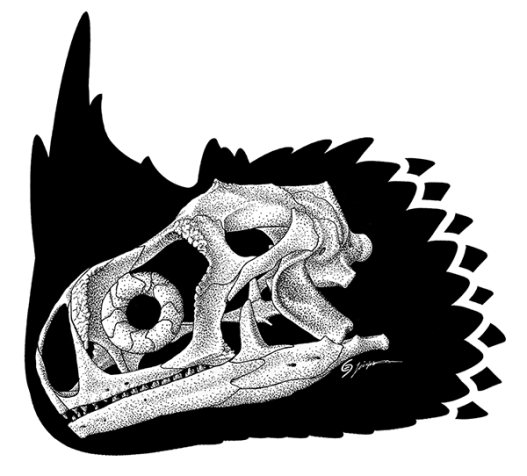 So this is not a swan song, but it is the change from what I was, and where I was going, to who I am now, and where I must be headed.  And such change means walking away from … all of this … for now.