So much has been written about Nanotyrannus, a catch-up article is hardly necessary. Indeed, many have been written, some published. The history of the name, and of the specimen that underlies it, is well-known. It behooves us, instead, to look into recent history than the past, although of course, knowing what comes before is still important.

Many decades ago, tyrannosaurs were mysterious animals, with few complete skulls, and fewer skeletons to go about. Time skips forward and we have nearly complete skulls, for many taxa, and many complete skeletons for them. And moreover, we found various different growth stages. Animals typically change as they age; they are not born as perfect miniatures, as homonculi (or animiculi?) of their greater, older selves. But what degree of differences — there’s the problem.

I will not talk too much on the subject on ontogeny. Not needlessly, I have done so already. I will point out that that MOR crew, including Denver Fowler, Jack Horner, and John Scannella, amongst others, have begun using a term “ontogimorph” for which different growth stages, as in Carr’s tyrant series, may be termed. This is especially preferrable in my opinion over the use of terms such as juvenile, hatchling, subadult, adult, etc. because they are devoid of a problem those terms possess, the use of relative age affixed to social concepts[n1]. But ontogeny is at the core of this current subject, so its importance can only be here stressed: Whatever we know about the ontogeny of dinosaurs, we must infer from their relatives, from scant fossils, and from speculations on development of tissues we cannot observe at every ontogenetic level. For tyrannosaurs, we miss the various “critical” ontogimorphs for many taxa.

Into this confusion, the skull labeled CMNH 7541 — bearing the monicker Nanotyrannus lancensis, the “dwarf tyrant from Lance” — is prominent. So much so that inferred importance led other workers to designated various “young” animals as adults, near adults, or overly exaggerate their perceived skeletal uniqueness. Giant heads, Short snouts. Round orbital fenestrae. Slender steak-knife teeth, but not bananas! Tiniest arms ever. Extremely long hindlegs. Odd proportions. And a groove on the side of the dentary. Among many, many others.

It seems the career of Thomas Carr, a specialist on tyrannosaurids, is to deal with this very issue: the validity of Nanotyrannus. Since the taxon lancensis was first erected, a seemingly late-surviving albertosaur-like tyrannosaur, found in the same sediments as has produced Tyrannosaurus rex and fauna, the oddity of the skull — itself slightly twisted on its long axis, its mandible pushed forward along with the suspensorial bones of both cheeks, crushing the back half of the outer bones into the circum-orbital ones — intrigues as much as it becomes, swiftly, annoying. The workers who applied plaster to the incomplete skull did so to mimic that of skulls of Gorgosaurus libratus, or Albertosaurus libratus — depending on who you talk to. Later, much later, the skull has been handled, examined in-depth using computed tomography scanning, and its secrets plumbed. Over various papers, Carr gently worked out how the expected ontogeny of tyrannosaurs would result in a series of Tyrannosaurus rex getting smaller and smaller and looking more and more like albertosaurines and less like tyrannosaurines. New tyrants with multiple, differently aged specimens only reinforced that there wasn’t, in fact, a series of distinct, sharply size-segregated, but all adult groups of tyrannosaur taxa running around the Maastrichtian.

Then, not too long ago, new material was discovered, collected, and prepared at the Burpee Museum, as BMRP 2002.4.1, and named “Jane.” Another delicate young tyrant, “Jane” reignited the debate over “Nanotyrannus.” In the most complete attempt to date to set the case (literally) for the taxon as distinct, Pete Larson wrote a homily to CMNH 7541 using BMRP 2002.4.1 as its vehicle. “Jane,” he would argue, nailed down how distinct, in its skeleton, a gangly animal Nano was, for he referred “Jane” to Nanotyrannus lancensis. Most of the reasons listed are the subject of future work by Carr and colleagues. Despite this, two new pieces have followed suit to prop up the claims that Nanotyrannus is really real.

The first comes from Scott Persons and Phil Currie. I’ve recently discussed their work detailed the hindlimb and tail anatomy of oviraptorosaurs. The authors turn toward devising a valuable metric by which “legginess” can be assessed, or cursoriality that stems from it, regardless of ontogeny. In it, the authors begin with the (reasonably well-supported) assumption that femoral length is a reasonable predictor of body mass, and thus use length of femur versus proportions in the lower leg. Using the femur as the basis for calculating body mass, they compare this to the length of the lower leg to derive a “CLP” score. They find, for instance, that amongst tyrannosaurs, Nanotyrannus lancensis deviates highly. While speaking generally on tyrannosauroids, Persons and Currie (2016) offer some effectively supportive commentary regarding the value of using Nanotyrannus lancensis, simply by doing so. They describe the difference as being higher than amongst magnitude-different ontogenetically distinct albertosaurines, and thus call it out merely by its distinction. The paper is more than Nanotyrannus. For instance, it calls out cursoriality in dromaeosaurids as being much higher than the seeming legginess of troodontids, but that this condition afflicted principally smaller, earlier, “basal” dromaeosaurs, such as microraptorines. Compsognathus, and some non-coelurosaurian tetanurans, were also highly cursorial. 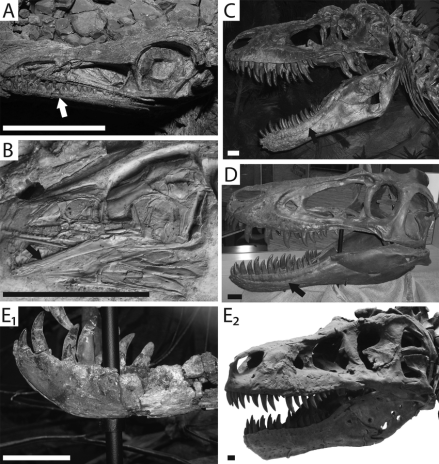 The second comes from Joshua Schmerge and Bruce Rothschild. It discusses a feature that is really rather curiously absent from the studies of … well … most animals. A “groove” lies on the outer surface of the dentary in most theropod dinosaurs. This groove often perfectly parallels the dentigerous margin of the dentary, and within it round to oval to elongate slit-like foramina are found, also paralleling the dentigerous margin of the dentary. It is even present when teeth are absent in some taxa. It is present in birds, in turtles, lizards, snakes. In some tyrannosauroids, the groove is absent. Is this a valuable character? That depends on what the groove is. Speculation generally resolves to being a passage for vascular tissues and nerves from within the dentary (mandibular branch of the trigeminal nerve) to its outside. Why is not really clear, although I can healthily infer that copious amounts of soft-tissue are being vascularized and innervated; indeed, the larger the groove, the more the vascular or nervous tissues involved, but probably the former more so than the latter. Schmerge and Rothschild (2016) present this study, using a few tyrannosaurid skulls, to demonstrate, in their brevity, that CMNH 7541 (and, remarkably, BMRP 2002.4.1!) rather resembles albertosaurine tyrants in possessing a dentary groove whereas, even more remarkably, adult Tyrannosaurus rex do not.

The first of these papers prompted morphometrician-ologist Manabu Sakamoto to make a rare public response on the certainly unintended celebrity of the paper by calling out its methodology. Geometric morphometry is, above all, an application of mathematics to the subject of shapes. But it works on many other things, and being familiar with the ways that the data makes pretty imagery, Sakamoto dug deeper. Ultimately, while affirming their results from data, Sakamoto showed the necessity of performing a logarithmic transformation to the dataset; not merely stopping at a regression, but determining value to the regression. He questions the ultimate value of the declarations in Persons and Currie on the subject of taxonomy:

Persons and Currie’s (2016) paper was only incidentally about Nanotryannus; but by its inclusion, and the odd conclusion of that small portion of the dataset, otherwise overshadowing the paper itself. In contrast, Schmerge & Rothschild’s (2016) paper was principally about Nanotyrannus, and the subject of ontogeny, and why we’re really talking about it. The paper was clearly the result of generalizing the specific, and the faults of small sample sizes, the exact same problem that Sakamoto found with Persons & Currie. It prompted not just me but also Thom Carr to write on the subject nearly at the same time (Carr’s comments were to Facebook). Later, Mickey Mortimer joined in, with comments on the phylogenetic matrix used by Schmerge & Rothschild. These comments were back in January.

My focus was on defining the groove, its relation to how it’s been termed various things, and how it seems to change shape in ontogeny. I then focused on tyrannosaurine tyrannosaurids, with a focus on Bistahieversor sealeyi, a taxon Carr described from multiple, ontogenetically distinct specimens. At the time he wrote his response, it was clear a formal answer would be forthcoming.

Just a few days ago, the Corrected Proof of a formal response to Schmerge and Rothschild (2016) appeared, written from Steve Brusatte & colleagues, of whom Thom Carr is included. These authors laid out the argument I made in more detail, noting that both the groove is ontogenetically variable (as I pointed out for Bistahieversor sealeyi) but that Tyrannosaurus rex, in fact, does also possess the groove. Less so questions of what qualifies as a groove, the authors argue that the lateral feature on the dentary changes form from a broad “sulcus” into a narrow incisure. The reasoning for this change is not explored, but one I am very much interested in; but it is also less important than the fact that it is, in actuality, present where argued it was absent. Importantly, as Thom Carr wrote publically, the “groove” is present in the holotype of Tyrannosaurus rex, CM 9380, agreeing with my reference to “Stan,” BHI 3033. As both specimens are more or less from similar-sized animals, one may speculate on its relation ontogenetically, disappearing or reduced to a thin depression as the tyrant ages.

So, contra Schmerge & Rothschild (2016), while CMNH 7541 bears a lateral dentary groove, it means little in relation to its taxonomic status, and is not absent in tyrannosaurines; and regardless to what Persons and Currie (2016) argue about cursorial features relative to body mass in theropods, the legginess of “Jane” is not so extreme that it need support taxonomic separation, but merely that younger tyrants were perhaps just so much more cursorial than their older kin.

[n1]“Adult” means something that many animals do not experience; sexual and somatic maturity are exactly reversed in crocs and birds [Bailleul & others, 2016], and tying “adult” to one or the other results in confusions best left to sociologists. Note that I heartily disagree with a recent paper from Hone, Farke and Wedel (2015) on the subject of the use of the term “adult,” for this reason. In the context they use it, and decry its importance, it is clear they use it in the same manner that Linnaeus, and systematics from him to now, use “genus” as the base unit of taxonomy, despite that the genus is underpinned, propped up, and in fact defined, by its type species. A genus, like an adult, becomes a term of art, to be moved about with and built upon and deconstructed as needed — but, it is always merely art, and so like one a “genus” is never truly without use, but is also without independent function. It depends on others defining “genera” to affirm its own existence. In contrast, a species is true, however you define one. If an ontogenetic term can only be defined in relation to itself, it has little, if any, value.