Following all that work I’ve been doing on anatomy in oviraptorids, it should not come as a surprise that I am looking for ways to effectively represent this amassed data in digestible chunks. I don’t always want to write novellas discussing a topic, like a huge book review. Today, a small look at the various pneumatic structures found in theropod dinosaurs, especially oviraptorids. 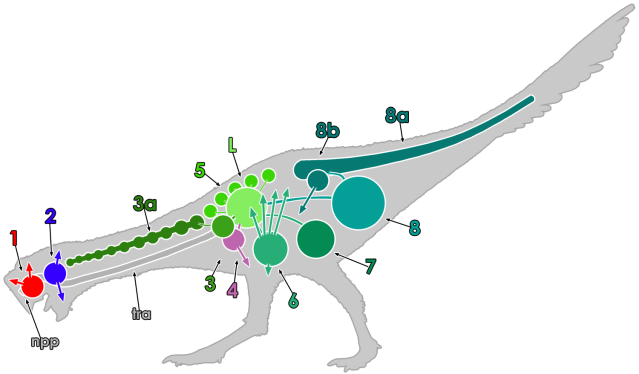 The pneumatic system of any given animal is comprised mostly of the lung. Indeed, all the little pockets that arise comes from expansions of the primary bronchus, a tissue that surrounds the lung itself, and it is this tissue that forms little sacs, the “pneumatic diverticulae,” that ends up through the body, and inside the bones, of various animals; the cranial sinuses, however, arise from the nasopharyngeal passage within the skull, rather than directly from the lung. Crocodilians have them, birds certainly have them, and so do pterosaurs. It stands to reason that dinosaurs, in all their diversity, have them, though for the moment ornithischian dinosaurs only seem to exhibit the paranasal sinus system (1, in red above). Most archosaurs, including pterosaurs, seem to start out with primarily only cranial sinuses, then demonstrate expansion of the lungs into the dorsal vertebrae (4, in dark yellow above), shoulder, and then neck. The latter two come from the clavicular air sac (3, 3a and 3b, in orange above). The belly and ribs and internal spaces of the body cavity are pneumatized from the thoracic air sacs (5 and 6, in shades of green above), while the hips and hindlimbs, sacrum, and tail seem to be pneumatized from the abdominal air sac (7, 7a and 7b, in teal above). The lung, shown in yellow, is the only gas-exchanging portion of the system, and the trachea (shown in grey), is a non-collapsible tube for bringing air to and from the lungs.

It’s probably not the same in every animal. Indeed, birds, pterosaurs and sauropods seem to have developed their degrees of pneumatization independently from one another, but given the lack of any ancestor each shares with as extensive a pneumatic system (crocs lack anything as progressive as seen above), it is likely that only some of thoracic air sacs were present plesiomorphically, to then be elaborated upon by each clade separately. While birds and pterosaurs both have brachial air sacs, pneumatization of the forelimb in pterosaurs doesn’t seem to occur in basal clades, and some lineages of pterosaur may have elaborated these structures in the forelimb and wing membrane differently from one another, especially as the presence and position of pneumatic foramina differ amongst pterodactyloids where the tissues appear extensively.

There is reasonable certainty that the basic theropod air sac plan (shown above) follows the same Bauplan as does that of birds, and that birds merely elaborated upon this plan from their ancestors. The presence of most pneumatic systems in archosaurs is a tricky thing, based largely on inference; however, it is possible to directly determine the presence of an air sac from the presence of pneumatically hollow bones (pterosaurs, and saurischian dinosaurs including birds), pneumatic foramina (structures not apparently serving a neurovascular purpose, seen in crocs, some archosauromorphan “pre-crocs,” pterosaurs, and saurischian dinosaurs including birds), or the structures that form on bone surfaces from diverticulae pushing against them, most dramatically those of the vertebral centra in sauropods.

Passing from the front of the body (head) to the rear, but not in evolutionary diverging order or basal system, pneumatic systems invading the bones of archosaurs are:

This system is shown in Red.

Starting with the antorbital air sac, this structure invades the bones surrounding it (maxilla, lacrimal, nasal, palatine, ectopterygoid, pterygoid), and from there into adjacent bones (premaxilla from maxilla and possibly the nasal, frontal from nasal, and probably the squamosal). This system is responsible for the crazy-straw nasal passages and expanded snout of ankylosaurians, and probably the gigantic narial aperture in ceratopsians. The PNS is also present in mammals, and surrounds the orbit and forms a form of “crumple zone.”

This system is shown in Blue.

Posterior to the PNS, and closer to the exit of the nasopharyngeal passage through the bony choanae (or “internal nares”), the paratympanic system surrounds the inner ear and from there invades the bones surrounding the braincase. This is typically where they stay, although branches of them form the interorbital air sacs, sit between muscles in the adductor chamber in birds, and invade the quadrate and, from there, into the articular of the mandible; from the articular, the PTS expands into the mandible. The PTS is also responsible for pneumatic hyoid bones, especially the marvelous thing (from Darren Naish’s Tetrapod Zoology blog) that exists in the howler monkeys (Alouatta).

This system is shown in Orange.

The first branch of the CLAS is the clavicular air sac itself, which unique amongst the other branches of the systems arising from the lung itself is a median structure, although the structure develops from left and right distinct air sacs that fuse. This air sac lies behind the shoulder girdle and between it, and when it presses against the sternum can form a pocket within it. Pneumatic furculae are the result of this air sac. In cases where the accessory clavicular apparatus of the shoulder, as the interclavicle and clavicles, are fused to the sternum, this air sac invades them too (as only so far in pterosaurs). This structure pneumatizes the shoulder, and consequently also the humerus, forming the brachial air sac.

This system is shown in Magenta.

On either side of the lungs, this pair of structures run between the shoulders and parallel to the vertebral column and between the central and the cervical ribs. The CAS is responsible for some fairly intricate pneumatic structures of the neck, including the awesome ribs of abelisaurid theropods, and of course the staggeringly complex structures of the neck in sauropods, from thin laminae and cavernous chambers to simple fossae but amazingly tiny and complex “spongy” bone. The pattern of pneumatic foramina this air sac creates in cervical vertebrae, and the divisions of fossae formed by sub-diverticulae, can be diagnostic among saurischian dinosaurs.

This system is shown in Dark Yellow.

It might be problematic to call this a “system,” as the DAS actually derives from multiple different pockets formed independently from the lung and each invades the adjacent vertebra, and communicates through the spinal cord and the inter vertebral diverticulae, as evidences from median foramina and pneumatic structures in birds and sauropods. It might be best to characterize this system, the first noncranial system to invade the skeleton, as a reticulate diverticulum, or “pneumatic net.”

This system is shown in Green.

This system arises from the ventral region of the anterior lung and pneumatizes the gastralia and ribs, as well as the abdominal muscles and is the primary pneumatic system involved in pelvic-assisted gastric breathing in crocs, birds, and probably dinosaurs.

This system is shown in Dark Green.

This system arises caudal, as its name may suggest, to the ATAS, and is responsible for pneumatizing the internal organs of the animal; this structure leaves no osteological evidence for its presence, but is followed by the AAS, and consequently if there is skeletal evidence for the AAS and for the ATAS, it can be inferred that there is a PTAS.

This system is shown in Teal.

In birds, distal limb elements and subdermal structures are pneumatized by subcutaneous air sacs, but as these develop from their adjacent proximal limb-based air sac (branchial from the CLAS, femoral from the AAS) they thus can be grouped under those headings. These structures pneumatize their respective elements (meta-, epi- and autopodial elements; integument; feathers in birds) externally, forming small pockets in the bone within which a foramen penetrates the bone. Similar to pterosaur wing structures, distal limb pockets, such as in the astragalus and calcaneum of theropodan dinosaurs, arise from these subsidiary, external diverticulae.