I’ve published several articles on the subject of Spinosaurus aegyptiacus:

Spinosaurus Spines – WP#3 and a followup with Spinosaurus – A Hint represent my initial works in which I had attempted this, finding that the tallest, recumbent spine of the dorsal sail was probably a caudal neural spine, in parallel with Andrea Cau. Scott Hartman followed suit and has produced a well-developed skeletal reconstruction of the skeleton based on a casual spinosaurid, using this rounded, and not abrupt or angular, spine shape. I am glad to be counted amongst them, given my lack of any credentials.

Amongst my more ambitious projects was to resolve the issue of people tending to overlump disparate specimens into single taxa, especially when those specimens belong to spatially well-separated organisms. Spinosaurs are a subject relevant to this because over the past decade or so almost all North African spinosaur material has been at one point or another been lumped into Spinosaurus aegyptiacus. Given the sometimes distinct morphology of various bits, and the lack of overlap amongst other species (a snout from Algeria, vertebrae from Morocco, fragments here and there) would be really nicely resolved had we more material, an articular skeleton with associated cranial material being best.

In a series of posts, I discussed the issue of scaling and what the actual material represents:

Ultimately, the overall theme has been positive, and unfortunately also inconclusive. My argument was generally that there were distinct snout material from Morocco and Algeria than would fit the mandible from Egypt. Some of this investigation hasn’t borne fruit — but other has, but not by me.

Last year, Ibrahim et al. (2014) published a paper on a series of specimens collected at various times and by various people from what we are assured was a single locality. A television program by National Geographic showed us where this site was, a hole in the ground at the base of a cliff in which fossils abounded, from the hole, the sides of the hole, the cliff above, all we are told were from similar animals. A single specimen, some of it purportedly articulated, resolved, and they published this as a new specimen of Spinosaurus aegyptiacus. I continue to stress by doubt as to the methods of its collection, but until better data is forthcoming, we must all wait for the monographic treatment of the specimen.

Others have been as kind: cautious, optimistic, but a little cynical. Scott wrote about scaling issues in the paper here, then again about some of the source material here. I wrote about it here, The Outlaw Spino Saurus. Michael Mortimer wrote about it here. Scott and Michael went to some specifics of their issues, such as the conflation of the Spinosaurus B and Moroccan “aegyptiacus” material. Mark Witton was concerned somewhat on the subject of limb scaling. Nizar Ibrahim, the primary author of the study, has responded to Witton’s, Scott’s, and my blogs on the subjects. We’ve chosen generally to be gracious about the response, so have held our cynicism on the matter in check. It is always wise to be professional [the verb] even if some of us (i.e., me) aren’t actually professionals [the noun]. Witton published on Ibrahim’s response here, and Scott did the same here.

We are all patient and happy to wait for the further work. However, some of us also knew that some additional work has been in the pipeline on the subject. Not only is Ibrahim preparing a monograph on their material, there’s also an extremely well preserved spinosaur skeleton from Thailand, and that is forthcoming from Ronan Allain. In the meanwhile, of concern has been the identification of material in Morocco to spinosaurs, namely, the material that has been referred to Spinosaurus maroccanus and Sigilmassasaurus brevicollis. Ibrahim et al. had argued that these species constituted junior synonyms of aegyptiacus from Egypt. In addressing this claim comes a new, vast, and frankly very meaty paper from Serjoscha Evers, University of Oxford, UK, and colleagues on Sigilmassasaurus brevicollis addressing several concerns.

The best part, actually, is that this paper is OA.

Of the many things it addresses, including revising McFeeters et al. (2013) earlier redescription of Sigilmassasaurus brevicollis, was to deal with the potential argument of overlap, and argue there are two distinct spinosaurid morphotypes within the Moroccan assemblage. If this is true, it would weaken the argument from Ibrahim et al. that there is but one taxon, and that that was aeygptiacus. Moreover, they addressed specific claims concerning affinities of maroccanus (junior to brevicollis), and through the process of defining trends along the transition of vertebrae through the cervical and into the dorsal series among basal tetanurans. Thus, they deem, it would be possible to deremine where in the vertebral series each particular, isolated element recovered amongst the species fit in the neck, and then compare these across taxa. They also further addressed the issue of the nature of the lost holotype of Spinosaurus aegyptiacus, and Ibrahim et al.’s designation of their new specimen as the “neotype,” a practice I recall having questioned explicitly.

The problem partially lies on the limited discussion on variation and actual morphology along the neck in spinosaurids. To date, only one cervical series of a single spinosaurid specimen has been described, that of Baryonyx walkeri. Supposedly, portions of the neck of Suchomimus tenerensis (or, alternately Baryonyx tenerensis) exist, but this material hasn’t been described. Using a nearly complete cervical series from a specimen of Ichthyovenator laosensis as a guideline, Evers et al. (2015) compared the cervicals and anterior dorsals of “Spinosaurus” B, maroccanus, aegyptiacus, Sigilmassasaurus brevicollis, and Baryonyx walkeri to a general grade of tetanurans in order to address the concerns over where these various bits actually went. In the process, they revised the position of the holotype of brevicollis as an anterior dorsal. Confirming my previous argument that the first cervical in the series of aegyptiacus was NOT an axis, although they are less certain about where in the neck it lies, they further describe and illustrate the neck of Sigilmassasaurus in comparison to Baryonyx, reproduced below: 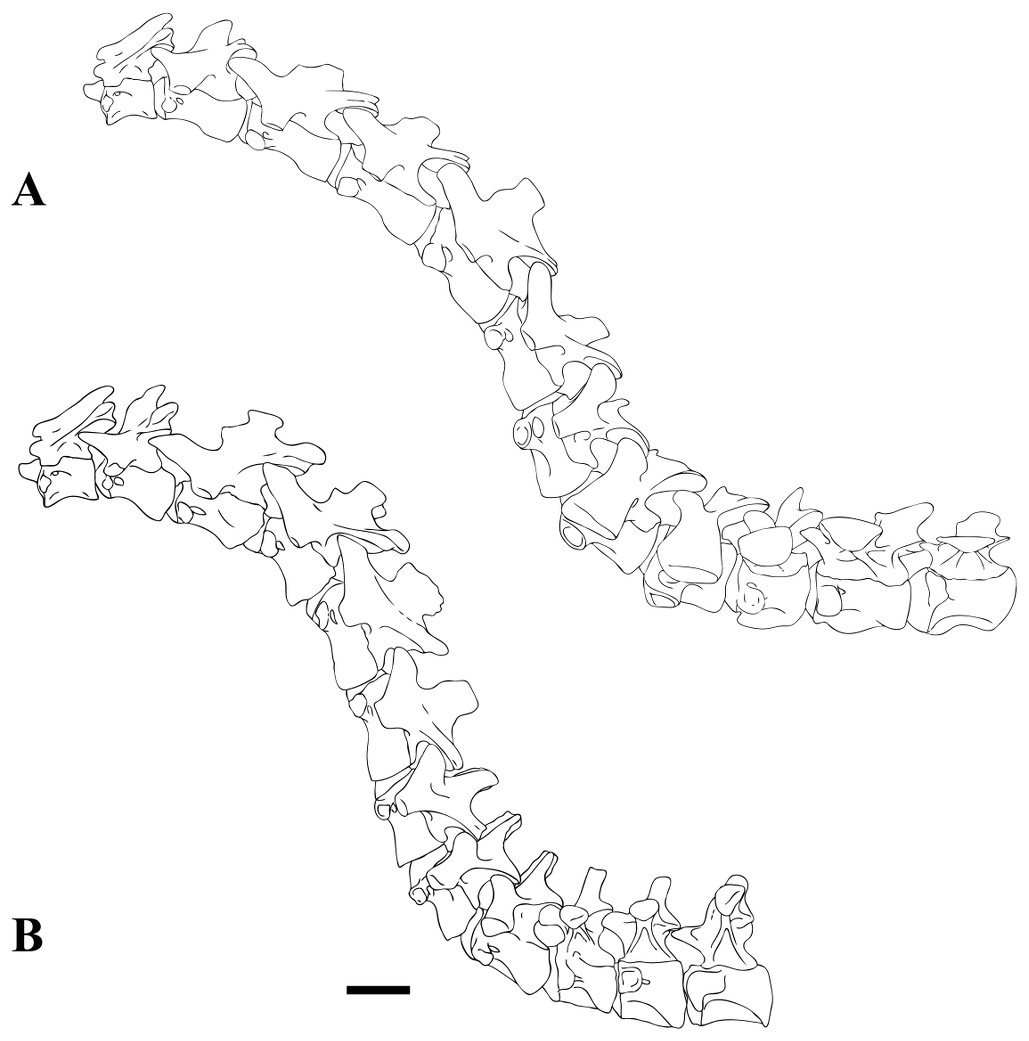 This neck differs markedly in morphology from that of Spinosaurus aegyptiacus in several respects, including the extent of pneumatic openings, the shape and proportions of vertebrae, especially their centra and neural spines, and the position, extent, development, and shape of the ventral keel and hypapophysis. Cervicals in aegyptiacus lack these features, and also present large epipophyses, absent in brevicollis. Further differences, such as tall neural spines, and anterior dorsal vertebrae with tall, craniocaudally long bases and with a rounded or trapezoidal basal expansion, the expression of laminae in the spine and their relationship to the processes they connect, etc., all describe a distinct set of vertebrae.

Problematically, after addressing these differences between the two taxa, Evers et al. (2015) further considered whether there were two spinosaurids in the Kem Kem, and conclude that several additional isolated vertebrae show comparable features to the eastern taxon, but not brevicollis, indicating yes, there are two species. Whether that second species is aegyptiacus must wait somewhat for description of the Ichthyovenator laosensis specimen and FSAC-KK 11888. This would all be easier, of course, if the material weren’t often so fragmentary.

The disparity amongst secondarily associated material (specimens that don’t share overlapping elements with other specimens; and secondarily because they are “associated” after the fact, much as MSNM V4047 was deemed more or less the correct snout for the FSAC-KK 11888 Ibrahim et al. specimen) and then further the disparity in locality (with the further apart the localities are compounding their disparity) – here between central Morocco, western Algeria, and east-central Egypt – makes the identification of singular species very problematic. We should be thankful, at least, as we wait for the description of further Ichthyovenator laosensis and “Spinosaurus aegyptiacus” material, that this discussion occurs, and that at least some of it is in the open access venue of PeerJ, although other OA venues are supportive.

It remains a concern whether what we find in these sediments represents one, two, three, or even seven distinct species of large-bodied carnivorous, piscivorous in fact, theropod dinosaurs. From the east in Egypt, we’ve recovered several identified skeletons, lost in physical form but for incredibly vivid and detailed description and beautiful, if somewhat dated illustrations (which Ibrahim et al. 2015 found cause to deem merely “drawings”, and thus not useful, part of their argument that the neotype designation was worthy). Then in Tunis and Algeria, vertebral fragments, teeth, and a bit of upper jaw. Then in Morocco, many more remains, almost all of which have been collected by private persons without such as a single piece of locality data associated with them. It is for that latter reason that previous workers have largely resorted to singular specimen numbers for each element recovered; that this was not done with FSAC-KK 11888 is unusual, given that it is collected from multiple periods of time without confirmation they all come from a single site or skeleton.

So why can’t it all be Spinosaurus?  And if it’s all Spinosaurus, why not all S. aegyptiacus?  It becomes a lumper-splitter issue at that point, and I’ll note if Evers et al.’s taxonomy is used (Sigilmassasaurus brevicollis, S. sp. for ‘Spinosaurus B’, Spinosaurus aegyptiacus for the holotype only), then virtually all African spinosaur materials are Spinosauridae/-inae indet.

[Edit: A link has been added above to the Mickey’s quote.]

Indeed, why not? Or rather, to pose the alternative, why assume all of this is one taxon?

The reason we shouldn’t do what Ibrahim et al. did is not because we are wont to splitting, and keeping taxonomic distinct entities everywhere, but because of the issues involved exactly with variation. It is no different to assume that all of the specimens represent a variation within a species than to assume that each distinct variant is a distinct species. And adding to this the spatial issues, it would be like arguing that Dryptosaurus aquilunguis, Daspletosaurus torosus, and Tyrannosaurus rex were all the same species. The first of these is known from the east cost, the others from the central Great Plains, and with the second further north than the third in overall range. We might have better luck telling the difference because of the sample size difference, and its thoouroughness: we have complete skeletons for some of these species, and at least complete skulls. In some ways, though, the situation is also akin to that of the “brontosaur” species that were recently recognized through a specimen-level analysis: when you get down to it, over the course of millions of years, you will be unlikely to see just one species of a type of animal persist in a single area. The Morrison Formation has spanned a long time, and covers a wide spatial range, so the recovery of even closely-spaced taxa may be predicated on fact, and the phylogenetic analysis, without a priori lumping of specimens, seems to bear this out. (Conversely, the Hell Creek Formation spans less time than the Morrison, covers a smaller range, and the ceratopsian and tyrannosaur sampling has been extremely high, resulting in a refined consideration of the small little phylogenetic outliers.) I’d be almost concerned why some don’t split their taxonomic OTUs into a specimen level analysis to TEST their lumping, whether it be to assume ontogeny or to assume nomenclatural validity.