For A Few Spinosaurus More

As I intimated earlier — and to quote Monty Python — the holotype of Spinosaurus aegyptiacus has ceased to be. 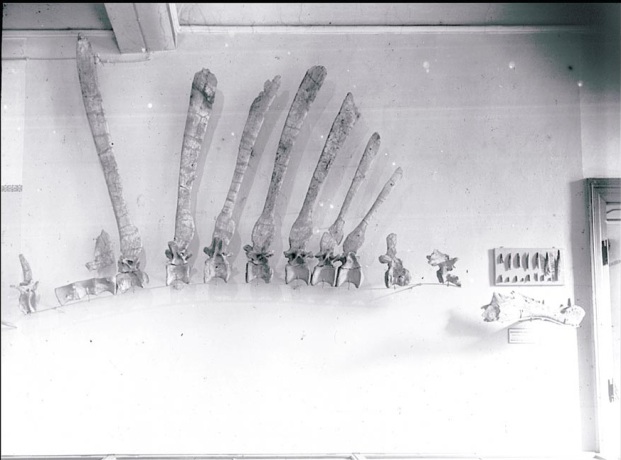 Spinosaurus aegyptiacus, mount of the holotype IPHG (BSP) 1912 VIII 19. The only remaining photographic evidence known for the material. After Smith et al., 2006.

Typically, then, this makes it immeasurably difficult to compare new material to the holotype. This is not even considering the difficulty implicit in referring material to taxa for which there is not comparable element preserved in the holotype, and from which type locality no further [topotypic] material has been derived to allow supplementation of the type specimen. This means we are left with a hard choice: we can continue to use von Stromer’s excellent, but dated, plates and photographs (Smith et al., 2006) or, we can set the material aside and replace the nomenclature, entrenched as it is, with new names for the more recent taxa. This is important if, as appears to be the case with regards to Cenomanian taxa, there may be regional variation between the Moroccan and Egyptian provinces. A third possibility may be that a neotype be designated to fix the nomenclature, but so far, topotypic material is limited in diagnostic quality; most new material described has been “typical” teeth, and thus may be useless for setting a new type, almost certainly the preference would be for a vertebral specimen or series.

A specimen has been noted in preparation for description by Angela Milner from northern Africa for several years now (Milner, 2003), but another one appears from private collectors and in mounts, as seen here. 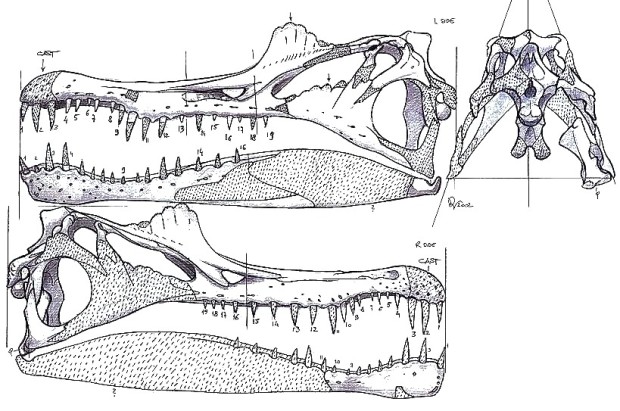 This material may, or may not, elucidate the quality of Spinosaurus material, but they do very little on their own to settle the issue of what is Spinosaurus aegyptiacus. It is more interesting to note that when having the opportunity to settle with new information, dal Sasso et al. (2005) chose to refer their new material despite a lack of comparable material, due to the idea that there was not quanitfiable variation among the known material. As I noted, most of that is scraps of partial vertebrae and teeth. Precisely what level of analysis needs to be used to qualify this taxonomically, and has it been done? I think it requires some morphometric analysis, and that has not yet been done. Moreover, until new material can be found that somehow matches von Stromer’s material to the best of our descriptive capability, I think it is severely unwise to refer new material to Spinosaurus aegyptiacus. Conservatively, I would prefer a new name, or a new type specimen to fix the name to, and the basis of the latter is slim indeed.

But even if we accept this material is somehow Spinosaurus, or Spinosaurus aegyptiacus, there is the issue of applying the material to a single animal:

The material described by dal Sasso et al. (2005) represents the rostral portion of the snout. How much of the snout depends on the reconstruction, to which end few material actually helps. Spinosaurids are generally divided into two clades, primarily defined on the structure of their teeth: Spinosaurinae, and Baryonychinae. The former have unserrated teeth with distinct vertical fluting (or ribbing) and relatively smooth enamel surfaces, and relatively low recurvature, and are generally broader along the tooth than in baryonychines. Alternately, baryonychines have serrations, low fluting or ribbing, distinctly wrinkled enamel, and higher recurvature. For the record, I suspect that basal spinosaurines should have teeth much like baryonychines, as this is the ancestral condition from which such spinosaurids would arise. These taxa differ in the rostrum, as well, but it is only in recent discoveries that this data has become more available.

First, there is only one well-preserved spinosaurine skull known, the holotype of Irritator challengeri, SMNS 58022 (Martill et al., 1996). Originally described as a maniraptoran of some sort, it has since been argued to be a spinosaurid (Sereno et al., 1998 and others) based on clear data in the braincase and rostrum. This has been supported by arguments in favor of the holotype of Angaturama limai, GP/2T-5 (Kellner & Campos, 1996) as potentially consisting of the rostral fragment that is missing from SMNH 58022 (Sues et al., 2002), although Kellner has disagreed in multiple occasions due to the lack of actual overlap and purported morphological differences in the teeth and presence of a high midline rostral crest apparently absent in Irritator challengeri. While I disagree with the general criteria meant to keep the taxa apart, I would suggest that until distinct material can affirm the referral, it might be best to keep the two taxa apart.

As shown above, other undescribed skulls are known, but they are useless as either private specimens or potential chimaeric specimens. This leaves the only three well-preserved cranial remains, IPHG 1912 VIII 19, MNHN SAM 124, and MSNM V4047. These specimens differ in size by a considerable degree: the nearly complete right dentary of IPHG 1912 VIII 19 is roughly 525mm long, and thus just over half a meter; MSNM V4047 is 988mm, almost 1 meter in length; while MNHN SAM 124 is around 600mm.

So there is some concern about the scaling issues involved that prevent us from simply slapping a snout onto a jaw, and calling it good. No, i do not say that dal Sasso do this; I call into question, rather, the effectiveness of simply lumping specimens from across Africa into a single taxon without a grand deal more data to back it up. Scaling the material also underscores a thing that is bothersome, but also enticing:

Skull and mandibles of Spinosaurus aegyptiacus von Stromer (1915) reconstructed after dal Sasso et al. (2005) (left) and me (right). Scale bars indicate the actual sizes of the two key elements. Skull is reconstructed in generalization from von Stromer (1915) and dal Sasso et al. (2005), with a portion of the nasal crest simply merged with the snout fragment.

In the above image, a generalized skull of Spinosaurus aegyptiacus is presented based on IPHG 1912 VIII 19 and MSNM V4047, illustrating the open-jawed and close-jawed positions and relationships of various bones. The skull in the upper pair of illustrations are oriented so that the long axis of the ventral margin maxilla is level, while the same is true of the jugal ventral margin of the lower pair. The latter is meant to correspond roughly to the “alert” posture of the head. On the left, I’ve rendered the jaw as dal Sasso et al. describe it, and although this is not an element of their thesis (i.e., it has no bearing on the descriptive aspects of the paper and the science therein, which is spot-on) it does bear against the reconstructions and depictions of the head as shown.

Note that when scaling the jaw up isometrically, the mandible is extraordinarily deep. There are reasons to doubt the jaw was this deep, and the main reason is that IPHG 1912 VIII 19 is from a subadult animal, despite being from one of the largest theropod specimens found, and was thus not fully gorwn. Moreover, it is likely not even close to the size of the animal represented by MSNM V4047. Does this indicate that massive size gain could be obtained? I think that dal Sasso et al. (2005) have somewhat dogded this curiosity by scaling the mandible up only so much, creating the overbite, and also due to an inference that the “subnarial gap” between premaxillary rosetta and maxilla would have aesthetically or mechanically accomodated the dentary rosette. It is, in my opinion, wrong.

Virtually all animals with a rostrally expanded jaw tip pair the upper and lower expansions; they are hardly ever displaces so much as to be one behind the other. Moreover, piscivorous animals which acquire prey using the jaw tips, includoing but not limited to the gharials, some fish such as gar,and birds such as ducks, the spoonbill, etc.

Skull of the gharial, Gavialis gangeticus, borrowed from Digimorph.

An uneven jaw, with extended upper rostrum, typically develop in animals who regularly process prey with their upper jaws to such a degree that the lower jaw tends to lack elements of the processing apparatus. This is true in most raptorial birds, if not all of them, where the upper jaw is used to hook and tear flesh, disable or immobilize or kill, etc., and is also true in frugivorous or seed-eating birds, such as parrots, which use their lower jaw primarily to aid in cracking, but otherwise are limited in this respect to the upper jaw, which does most everything else.

So an enormously underslung jaw seems unreasonable for a fish-eating theropod, if this was indeed what Spinosaurus was doing. If it was, it means the upper and lower rostral rosettes should oppose one another, and this alters the reconstruction and proposed by dal Sasso et al. (2005). If the lower dentition were acquisitors of prey, and thus useful in feeding and processing, they must have been paired with the upper jaws. My reconstruction attempts to show this, although it certainly leaves more of a gap between the upper and lower jaws, but then, this may be related to the shapes of the jaws not being compatible. In animals with upper and lower prehension in the jaws, as above, the mandibles tend to be shaped to fit; but this must also permit the upper and lower jaws to work together in the same fashion. It then raises the question of whether the jaws changed shape during ontogeny, or the possible systematic variation among spinosaurs in the Late Cretaceous of Africa. I suspect the latter, and question the referral of MSNM V4047 to Spinosaurus aegyptiacus.

And that will leave us to the final post of this little series, whose title should only be obvious.

This entry was posted in Paleontology, Reconstruction, Taxonomy and tagged Diet, Spinosaurs. Bookmark the permalink.

12 Responses to For A Few Spinosaurus More