What follows is an historical essay on a subject which was intended for eventual presentation at SVP (here, the second abstract), as part of a projection on research that would resolve something that has never been practically tested. This essay is updated from scraps of data strewn about and leads nicely into current work that should help to resolve some of the issues I raise here. It is not intended to have a conclusion, but to be a part of a larger research paper that would include the practical experiment followed by whatever conclusion I would make of said experiment.

Way back when, the American Museum of Natural History funded a series of expeditions into Central Asia (the CAEs, or Central Asian Expeditions, of which there ) at the behest of then-museum president Henry Fairfield Osborn, under the auspice that they were to discover the ancient origins of Man deep in Asia. While Osborn’s reasons for this (opposing the “out-of-Africa” hypothesis) are irrelevant here, his resources were not, and he would send several expeditions into northern China and southern Mongolia (territory claimed at the time by China). What they discovered there spanned the Paleogene and Late Cretaceous epochs, and supplied the AMNH with ample material from which to spend the next several decades analyzing.

On one of the last expeditions, at Bayn Zag (a site under the cliffs of of the same name, called Shabarakh Usu or “Flaming Cliffs,” and a part of the Djadokhta Formation, which would only become more famous in time) George Olsen [n1] found this: 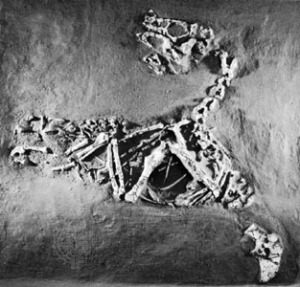 A Short History of Oviraptorid Diet
1. AMNH 6517 and the Legacy of Osborn’s “Hypothesis”

Associated with this was a nest of elongated eggs which were also found at the site of discovery; due to the preponderance of Protoceratops andrewsi specimens at Bayn Zag, and the large number of these eggs at this site, it had been inferred by Matthew and Granger a year earlier  that these eggs belonged to the animal they named Protoceratops andrewsi [1]. Finding an apparent predatory dinosaur laying in close proximity to these eggs suggested to H. F. Osborn that it was predating them. He named the animal Oviraptor philoceratops [2] in honor of this inference: Oviraptor, meaning “egg thief,” and philoceratops, meaning “fond of Ceratops,” in reference to a “thief, fond of ceratopsian eggs.” It’s a mishmash of a translation, due to the way Osborn coined the name.

In describing the then-unusual skull (a large-headed, short-necked and decently long-armed animal, he referred it to the Ornithomimidae due to the toothless jaws and general skeletal similarity), Osborn paid attention to the apparent edentulous jaws, with their high elevation, but made no other characterization of the skull save to remark on the apparent presence of a bony horn above the external naris (bony nostril) and the great number of cranial openings [n2]. 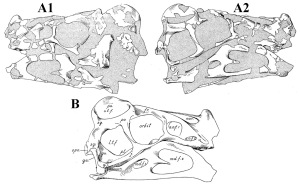 Illustrations of the skull of Oviraptor philoceratops (AMNH 6517). A, left (1) and right (2) views of the skull as it appeared in the matrix, and B, Osborn's reconstruction (Osborn noted the missing premaxilla, and thus appears not to have attempted to restore the skull to that degree). The "ventral prong" appears in A1 below the lachrymal. Modified from Osborn, 1924.

While the popular press of his time ran more with the discovery of dinosaur eggs in Mongolia, Osborn spent no further time on the animal that supposedly predated on them, and much of the paleontological work of the material focused on new taxa and describing the various Protoceratops grangeri specimens that had been collected, including a fantastic array of an ontogenetic series from hatchling to mature adults. Yet the specimen would be displayed in the AMNH as a wall mount, and was described as a predator of eggs, a veritable “thief.”

Popular media would take with the idea of a “character” in the form of the Mongolian egg thief in illustrating — using Osborn’s reconstruction for the head — Oviraptor as a perpetrator of grand nest larceny, almost universally portrayed carrying an egg in its hands, either running from the original nester, or consuming it on the spot. The most popular forms of this were John Sibbick’s illustration in Norman’s Illustrated Encyclopedia of Dinosaurs [3] and the instigating perpetrator in Disney’s Dinosaur [4] (the animal is responsible for the theft of the egg of the protagonist).

2. New Fossils and a New Perspective on Oviraptorid Diet

Mongolia would remain untouched by paleontologists until Soviet-prompted expeditions would be mounted into the Gobi during Mongolia’s struggle to gain recognized independence from China. These expeditions, began in the 1940’s, would recover a host of fossils from the Altai region of Mongolia, especially the Nemegt Valley. While studying with the Paleontological Institute (PIN) in Moscow, Mongolian Barsbold Rinchen [n3] would utilize a store of new cranial material of strange theropods and liken them to Oviraptor, coining in succession with description of new fossils the Oviraptoridae [5] (as a sister group to Ornithomimidae within his new Ornithomimosauria) and Oviraptorosauria [6] upon recognizing a new “family,” Ingeniidae, within his Oviraptorosauria, and Garudimimidae within Ornithomimosauria. Here, Barsbold would hint at specimens (such as GIN 100/42 and GI 100/20) that clearly showed that the cranial anatomy of Oviraptor philoceratops was drastically incomplete, as what was noted before as a “ventral prong” was actually a portion of the ectopterygoid and maxilla that were everted below the margin of the skull! Had Osborn recognized this, he would likely have either considered this poor preservation, or perhaps have designated this the basis of a new suborder of dinosaur (as was the wont of researchers like Marsh and Cope before him, and of whom he was the successor).

Barsbold would also publish an analysis mathematically modeling the jaws of an oviraptorid skull [7], to consider the relative bite strength the animal could exert. The results, Barsbold noted, was that the skull was over-built for crushing eggs, which are often very fragile things, but instead was more suited for crushing molluscs. He would also coin Conchoraptor gracilis for this skull [8] in direct allusion to this. Barsbold would support this analysis through sampling a ready supply of molluscs in the braided-river environment of the specimen, then inferred to derive from the ephemeral-river, eolian Djadokhta but later regarded as from the overlying and wetter Bayn Goyot Formation. Barsbold was primarily responsible for pointing out a host of homologies of the skull and skeleton Osborn missed, such as the presence of a fully-developed furcula (rather than a clavicle, as Osborn suggested) and the form of the palate which, ordinarily level and vaulted within the lateral bones of the skull, was oriented downward from the braincase at the rear and suspected below the lateral bones; the “prong” of AMNH 6517 was, in fact, a portion of these palatal bones, and had nothing to do with mastication. Barsbold, in a shorter paper [9] followed by an extensive monograph [10] would detail the form of this palate and the unusually bowed lower jaw, in order to resolve the cranial form of these extremely short-skulled animals and their very “fenestrated” construction.

So began the downfall of Osborn’s conjecture, enshrined in his nomenclature.

3. The MAE Experience and Another Perspective

Unfortunately for Barsbold, little attention would be paid to the critical revision of the jaw function, as it appeared in a Russian article published by a German company (and is thus very obscure). Media, supported by popular works such as Norman’s Encyclopedia [3], continued to copy the idea of an egg-biting oviraptorid, and sources familiar with Barsbold’s descriptive work did not cite the experimental paper, and indeed, do not mention the conclusion. Paul [11] does not cite the work, but does cite the conclusion, arguing

It has been suggested that they were semiaquatic mollusk eaters, but the slender-boned skull seems too weak for this. On the other hand, the skull was too strongly built and specialized for picking up small mammals or stealing eggs, as has been thought, although such items may have made up part of their diet. Some unusual herbivory was probable, but just what kind is not possible to tell.

Oviraptor began to enjoy something of a surge in popularity, then, as popular authors and illustrators portrayed it, often in a very active, avian manner, bringing attention away from its potential ecology and habits. Secondary preparation of AMNH 6517, over 60 years after its initial recovery, occurred when the mount was removed from display to promote research as the AMNH began to prepare its return to the Gobi of Mongolia. David Smith would fully describe the skull and skeleton [12] and pointed out finally that the ectopterygoid was not equivalent to the ventral “prongs” of the maxilla in Barsbold’s skull, and that the skull was even more incomplete in portions. This preparation has continued more apace, now resulting in a nearly fully-prepared skull exposing the braincase and medial mandible, otherwise unavailable. 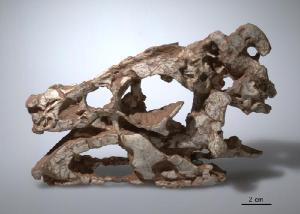 The Mongolian-American Expeditions into the Gobi, a joint project headed by Dashzeveg Demberylin from the Mongolian Institute of Geology (GIN) and Mark Norell, curator of paleontology in the AMNH, swept into Mongolia in the early 1990s and continue work to this day. Early in, after “hitting the usual places” such as Bayn Zag, Tugrig, and Khulsan, they discovered a new site which is literally teeming with well-preserved Djadokhta-age fossils, among them plentiful oviraptorid skulls and skeletons … and other stuff. While Barsbold’s work on Mongolian-Soviet era material and independently collected material, especially the exceptional GIN 100/42 which formed everyone’s concept of Oviraptor and still does to this day, began to revise the egg-eater myth of oviraptorids, new discoveries would seem to more firmly remove this idea from the minds of researchers.

The most amazing discoveries began when additional fossils of oviraptorids were found associated with nests, just as Olsen’s discovery was. Although not the first discovery since Olsen of this phenomenon (Dong and Currie would report on a specimen from Djadokhta-equivalent Bayan Mandahu — in the Wulansuhai Formation of Inner Mongolia, China, which was an indeterminate oviraptorid laying  partially atop several elongatoolithid eggs {exactly of the same form as that associated with AMNH 6517 [13]}), they were far better preserved and showed two things that no other discovery did:

First, these eggs contained embryonic remains of theropods [14], and thus were not attributable to Protoceratops andrewsi; they would implicitly infer that all such eggs as found would be attributable to oviraptorids instead, and the Bayn Zag eggs would belong to Oviraptor philoceratops. Second, first one, then several, oviraptorid skeletons would be found laying atop, in a full brooding posture, nests that were clearly intact and highly unlikely to be casually or catastrophically associated with the skeletons atop them [15]. Exceptionally, these allowed the authors to formulate a provisionary hypothesis: that oviraptorids did not predate eggs, but instead would have been selective carnivores with molluscivorous tendencies, especially due to the presence of troodontid neonate remains associated with the embryo [14,16].

[n1] A long-time coworker of CAE leader Walter Granger, for whom basal tyrannosaurid Alectrosaurus olseni is named.
[n2] In a presentation to members of the American Museum, Osborn originally prepared to name this taxon Fenestrosaurus (for Oviraptor, while excepting “philoceratops” would be something else as well), but shortly thereafter published the manuscript with Oviraptor. We can all thank him for not adding another “-saurus” taxon to the lists.
[n3] Mongolian names follow the Chinese model, where the surname precedes the personal name. However, names of children take their father’s personal name as their surname, and a new personal name. Thus, while Barsboldia sicinskii is named for Barsbold Rinchen, Rinchenia mongoliensis is named for Barsbold’s father.

6 Responses to Revising the Oviraptor Myth