There’s no shortage of fossil archosaurs now named solely from teeth, or partial jaw bones but diagnosed or described primarily on teeth. Last I checked, this number was well over 150. Most recently, some of these used to be dinosaurs, but have subsequently been removed due tot he finding of more complete cranial bits, and associated postcranial skeletons that affirm they are most certainly not what they were once claimed to be. It’s not a story uncommon in scientific disciplines: Science is an iterative process, and often begins with small bits of data; other the course of study after study, new and more complete, information is added, and rarely removed, in order to gain a better understanding of the nature and context of the data. In this case, the partial remains of an animal from the Triassic of Morocco, deemed a dinosaur for 25 years, played a role in increasing the scientific knowledge of the origin of a much more important group of now-extinct sauropsidan “reptiles.” Both that group, and Azendohsaurus itself, would receive a facelift, its hair done, mani- and pedicure — a full makeover.

Jean-Michel Dutuit described (in 1972) the remains of a partial skull and other bits from the Argana Formation, Triassic of Morocco, naming the animal Azendohsaurus laarousii. He likened them to an ornithischian, due to similarities in the shapes of the teeth and the seeming similarity of the jaw bones to that of taxa like Lesothosaurus. Subsequent work suggested it was, instead, a prosauropod (e.g., Thulborn, 1973; Gauffre, 1993), with Dutuit also revising his own position on the matter (in Dutuit & Heyler, 1983). And there research into the question largely stagnated, and Azendohsaurus has been a peculiar basal dinosaur since the 70s.

The holotype is a partial jaw and teeth, MTD XVI 1, but the most characteristic material includes a dentary (MNHN ALM 351) with over 15 teeth or tooth positions (most of them filled), and includes the tip; a maxilla (MNHN ALM 355-3) with an incomplete ascending process and a projected anterior lobe, with 11 tooth positions and half that intact teeth. There’s no evidence for a predentary or edentulous portion, as in ornithischians or silesaurids, respectively. The maxilla was identified with a distinct aperture, the antorbital fenestra. New material would revise this identification. 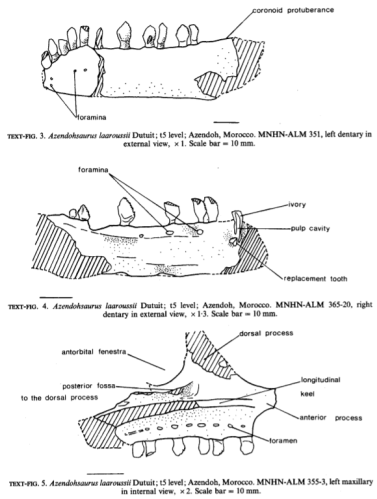 Morocco has since produced more material of Azendohsaurus laarousii, but it remains undescribed (Jalil & Knoll, 2002, is an abstract); still, further material has been located elsewhere of an animal very similar. The Triassic Isalo II beds of the Makay Formation of Madagascar have turned up a vast collection of peculiar animals very similar to that of southern Africa during the Triassic, as well as southern North America, principally the Chinle and Dockum Groups. This animal was named Azendohsaurus madagaskarensis, deemed not distinct enough to warrant its own distinct binomen. Turns out, Azendohsaurus represents a peculiar animal resembling Trilophosaurus, an iconic non-dinosaur of the Triassic with a slow body, long legs, long neck, and blunt, triangular head.

The new cranial material from Madagascar (Flynn et al., 2008) points to a peculiar, Trilophosaurus-like skull, with palatal dentition on the pterygoid, no antorbital fenestra, an open infratemporal arch, and other peculiarities including a strangely shaped laterosphenoid bone, the ossification of which was linked to archosauriforms, but which appears to be convergent (!). Cranial ossifications of the internal, originally cartilaginous segments of the braincase, interobital and supra-palatal tissues, ossifications of the tectum and various septae in the skull, suggest that we may be oversimplifying as phylogenetically informative their appearance solely due to their presence. One animal’s laterosphenoid may be another animal’s (in this case, the archosaur, turtle, and azendohsaur laterosphenoids) without forming at a single time in evolutionary history. They form the same way, in the same place … but their shapes and timing differ, thus they may not be so concisely parsimonious.

As I said, Science is a process. 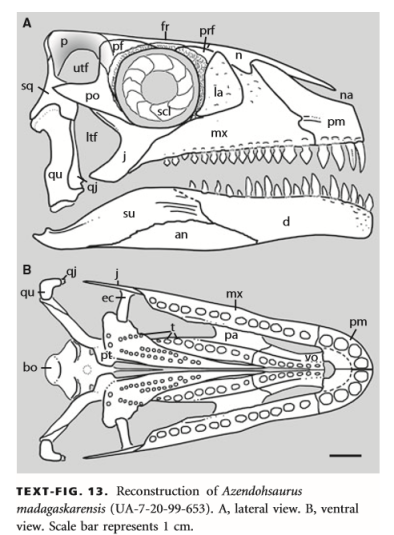 Aside: We move along well, and when we try to be conscious of the process, we move along very well. As long as you look at Science as the process and not the product, it doesn’t end up mattering what the result is; but when you try to make it about the end goal, the product, the idea you’re trying to prove, you’re diminishing Science a little more. It becomes rhetoric. The difference between “What is this…?” and “This is! Now what?” The less data you start with, the more options for the end result you may end up having; but that’s what happens when dealing with scraps. Being aware of scraps of bone and their effect on what you come up with (arguing lance-shaped teeth with rough serrations are a ornithischian, or prosauropod, thing, for instance) makes for interesting historical fodder as we discover more pieces and find out the animal is anything but what we expected. It’s happened now with nearly every single tooth-based “Triassic” taxon in the United States, and several other taxa abroad, that these ended up being crocodylian, silesaurid, something even further distinct.

Azendohsaurus madagaskariensis is now represented by a significant portion of the skeleton, and the animal doesn’t look at all like a dinosaur. It’s quadrupedal, the tail is short, the neck long-ish, the skull large and triangular and very blunt; the shoulder blades are huge, the arms articulate outwards so the elbow is bent inward, and same for the knees. The shoulders are larger than the hips, and between the coracoids a T-shaped bone called an interclavicle is large, very large, and distinct. There is little chance at all that this animal is some aberrant dinosaur, regardless of the similarities to portions of its jaws. And that means convergence.

Aside from any cautionary tale to tell about making overly broad assumptions of limited material, and how this has been done with teeth of animals as old as sharks and conodonts (though of the latter, “teeth” is a generalized term) and as recent as human ancestors. Other anatomical peculiarities aside from the head are generalized amongst the group to which Nesbitt et al. (2015) assigned both species referred to Azendohsaurus and other Triassic animals: Allokotosuchia. The name means “strange reptiles” (allokos + souchous), though less familiar use of “allokos” than “xenos,” which is far more common. The group is specifically meant to include a suite of taxa which have previously been aligned with the “protorosaurs” (such as Tanystropheus) but problematically so, such as Trilophosaurus; they provide the definition

Nesbitt et al. (2015) also coin the name Azendohsauridae to separate taxa within the root of Archosauromorpha away from trilophosaurs and rhynchosaurs (and potentially also turtles, unless they lie further archosaur-wards). Many of these taxa in both of these new clades include the large triangular head, an elegant and long neck — for some taxa, very long — and large limbs, a low-slung body, long tail, and large manus and pes. Azendohsaurus madagaskarensis, however, resembles some rhynchosaurs in possessing rather short manual and pedal digits, and large unguals. But the fingers and toes are very, very odd, and had they been viewed in isolation, it is likely their affinity would not have been towards a large, lizard-like, quadruped, but something far, far more … feathery.

Now compare these phalanges to the image below. 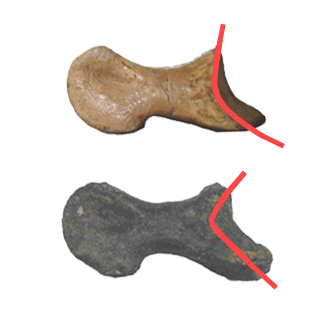 The presence of a deep proximal facet with a well-developed ventral flange extending back and beneath the preceding phalange or metapodial is present in a variety of small, feathery dinosaurs: dromaeosaurids, troodontids. It is also present in some non-dinosaurian taxa, but less well known, including some turtles. And unlike in dromaeosaurs, but like Proganochelys quenstedti, the phalanges of the digit each bear these proximoventral “heels,” so it is quite likely each one is associated with a tendinous structure associated with the digital flexor musculature that was as well developed as any other, but also with a more basic mechanical feature: a bony stop that prevents flexion too far, where phalanges without this structure would be capable of greater rotation than those without; most likely, any tendons would work on the individual phalanges passively from the primary point of mechanical force, at the ungual flexor tubercle, where the distal end of the flexor tendon ends. The unguals are also strongly mediolateral compressed, their dorsal margins strongly curved but their ventral slightly. I can’t help but think, as the authors do not dwell long on the subject of the shape or functional considerations as to their purpose, that these unguals resemble those of some sloths.

A functional similarity would be easy to imply due to these conditions; however, the function is not quite what it seems. The raptorial functionality of dromaeosaur second pedal digits is one thing, where the “heel” is also aligned on a proximal phalanx at a high extended angle in some cases, and is terminated by a very large, raptorial claw. Any function of the flexor tendon would have would tend to pull the digit straight as the toe as a whole flexes into the substrate, as indeed is implied in dromaeosaurs and troodontids. Larger heels in phalanges also inhibit flexion, increasing the strain during flexion without warping the joint. Given the shapes of the joints are also angular, and not smoothly curved, it seems also likely this inhibition is at play in those feathery dinosaurs. As such, the digits of the manus and pes in Azendohsaurus madagaskarensis would have endured high vertical strain, suggested of digging. Normally, digging animals have blunt, and very short phalanges, but in this case, there may also be locomotory reasons to keep the digits long and their ability to extend dorsally. Thus what may seem raptorial at first glance may merely be a means to keeping functionally constrained, possible scratch-digging adapted digits able to assist in rapid surface movement. Azendohsaurus would be no slouch. A deep pubis, in comparison to Trilophosaurus, implies more gastric volume in the torso.

A small handful of Triassic archosauromorphans appear to be closely related. Trilophosaurus buettneri and jacobsi; Spinosuchus casei, which may very well be the same as jacobsi, over which it would have taxonomic priority if they do end up the same taxon. This represents another example of partial, incomplete specimens bearing names that find themselves potentially in error as to what they belong to, but without the severe problems that plagued Azendohsaurus, or indeed Revueltosaurus, which went from a pervasive Triassic American “ornithischian” to a bizarre aetosaur-like basal crurotarsan. Pamelaria dolichotrachela, an exceptionally longer-necked taxon than the other allokosuchians; and Teraterpeton hrynewichorum, an exceptionally long-faced trliophosaurid are amongst other peculiarities settled into this strange group. But of them, only Trilophosaurus and Pamelaria lack teeth in their premaxilla and rostral mandibles. And all were gangly-limbed, large-bodied, with morphology similar to many extant monitors. Unlike monitors, they almost certainly comprised a range of herbivorous and faunivorous forms, with a likely range of dietary capability and preference regardless of tooth morphology; most monitors are almost exclusively faunivorous, and catch moderate to small prey, and range toward larger with cannibalistic habits.

I think it quite likely, given the reange of morphological features that were once deemed dinosaurian or ornithischians/prosauropod-like in the teeth and jaws of Azendohsaurus that were we to find similar, isolated jaws we’d make the same conclusions of them. Thus is lay speculation at this moment that Eshanosaurus deguchiianus, a purported Jurassic therizinosaur far removed from the morphology of even the most secure basal therizinosaur, may not even be dinosaurian. The Lufeng Formation is certainly an interesting place to further investigate a diverse fauna, and we would be better to keep open the possibility that some other speculative taxa are not as we style them, based on “crap” and otherwise very limited remains. Especially teeth.