A recent series of comments by paleo-artist Gregory Scott Paul (GSP in the common) on several list-servs has argued for a legalistic copyright or intellectual ownership of the visual medium of the skeletal diagram. Since the mid-1980s, Greg Paul has massively popularized this method, drawn on a technique Bakker used and adapted from a method that Chas Knight employed way back in the early 1900s. Paul has argued that his style has become so prevalent that it has spawned numerous knockoffs; but has also argued that his modern style of rendering skeletons for scientific publications, with a series of white bones on black silhouette (the same method I employ), with a specific posture (that of the end of the propulsive phase of the step cycle, arms tucked up as much as possible, head and neck flexed into an S-shape, and the tail drawn into an S-shape) is copyrightable. Some of us may disagree, or argue that this is problematic as it pushes other artists around.

But I’ve been careful in my reconstructions, having diverged from the Paulian posture for some time, although some come close. I have used a variety of postures for different animals, but now employ some specific concept postures depending on the group. Here’s the strange, toothless and puny-armed ceratosaur Limusaurus inextricabilis (Xu et al., 2009):

This is a “rearing” posture, and I think I will be adopting this posture as a standard model from now on, just to be “different.” It is also a very elegant and dynamic posture, and the look is fairly unique from other representative artists’. Bipedal theropods and whatsists will all get the same treatement. Meanwhile, quadrupeds: 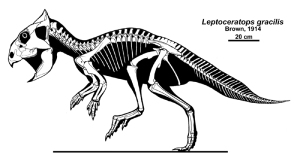 Leptoceratops gracilis Brown, 1914, rendered after several referred and the type specimens, but likely improperly scaled due to rendering after composite illustrations and a few independent bones.

I may use the same rearing method for quadrupeds that aren’t sauropods or crocodylians, simply because in those other animals, the elegance look wouldn’t work on a biological level (spinal support and all that) or would require significant reposturing that departs from the models employed here (as in sauropods, which may have reared in a particularly unique way — but more on this later, as the work is in the pipeline for publication).

Pterosaurs and birds receive the same makeover treatment: The arms are extended upward, parallel to the sagittal plane, to exaggerate the extension of the wing. They are also shown with an inclined spine.

Sauropods are trickier, and posturing them requires assumptions such as neck attitude, which I’ve talked about before, but here I’ve placed it in a position that departs from the typical Paulian style by a small amount.

Recently, however, Mike Hanson has re-done his Nigersaurus skeletal diagram with the express purpose of departing from the Paulian style, and it is a restoration that has been a long-time coming, placing the head close to the ground and the neck on a declining slope, instead of elevated to or above the horizontal.

This entry was posted in Art, Reconstruction. Bookmark the permalink.