As an artist, I view the world through an interpretive lens, not merely how I might depict a thing or what reaction I might get, but how I might see things in different lights; one has to be a little less subjective to others’ work and one’s own in order to compare this work. I believe that, especially as an artist, no depiction, no rendering is complete, but are segments of a continuum of interpretation. As a scientist, I must be objective about interpretations even more so, and there is a lot less room or subjectivity. It is a balance, being an artist and a scientist. Both influence each other, but I have to have two different brains in this game. I thus use my scientist’s brain to set aside my artist’s brain when the occasion is necessary.

As I mentioned in the last post, there hasn’t been a whole lot said of UCMP 143274, and what has been said has been brief, with distributions to either an avian identity (Stidham, 1998, 1999; Hope, 2002) or an ambiguous or nonavian identity (Dyke & Mayr, 1999) or even a mixture of the two (Waterhouse, 2006). I’ve missed Waterhouse’s contribution to this debate a few times, but a few years back I had occasion to see his reconstructions and then promptly forgot them. So it was rather surprising to note (again) that Waterhouse had reconstructed UCMP 143274 as either a bird [avian dinosaur] (below, left) or a caenagnathid nonavian dinosaur (below, right):

Waterhouse’s reconstructions of UCMP 143274 as a parrot or as a caenagnathid. Either reconstruction probably massively undersizes the relative extent of the jaw to the animal in question. In both cases, they’d be a lot smaller, but the jaw relatively bigger. Figure captions from the original.

The illustrations are also useful in showing another thing, that the silhouette of a living bird can be so dramatically distinct from that formed by its skeleton. Feathers, not merely flesh, completely deforms the shape of the animal’s outline, and thus it should be expected (as Waterhouse attempts) that a nonavian feathered animal will have a similarly distorted outline. The attempt falls short of expectation (by this time, Caudipteryx zoui was well-known and speculated to have been oviraptorosaurian, and Greg Paul — among many other artists — was illustrating oviraptorsaurs with large retrices and remiges).

The parrot is a particular bird, with a bizarrely huge head, cute zygodactylous foot, and when feathered, a very cute appearance. I illustrated one for my skeletal reconstructions on a challenge from Scott Hartman, and chose a parakeet:

Adding to this flesh-based outline that of all the feathers it would be adorned with, and the body would look quite different, and Waterhouse demonstrates this ably. But what of the nonavian form? For one, Waterhouse (2006) assumed merely the lateral shape of the jaw for his reconstruction; but the jaw preserves far more than suggested. It includes the entire symphyseal length of the mandible, and thus may preserve a significant portions of the jaw. In the parrots above, this length may comprise nearly 1/3rd the total jaw length, which for UCMP 143274 means the mandible may have only been 60mm long; but for caenagnathids, this value varies, and can comprise between 25% and over 35% the jaw length, which would suggest mandibles ranging in size from 80mm down to a similar 65mm or so. This would translate to skull lengths of (for a bird) ~70mm or up to 80mm, a small range of only 1cm, but with larger effects on body size. A caenagnathid might have a skull 1/10th the body length, but a parrot has one 1/5th-1/6th the body length (excluding feathers). This would then translate for the “bird” morphology of an animal about 350mm (and thus quite a big bird) to a “caenagnathid” morphology of an animal about 800mm, well over twice the length!

To illustrate this, I decided to attempt a re-reconstruction. 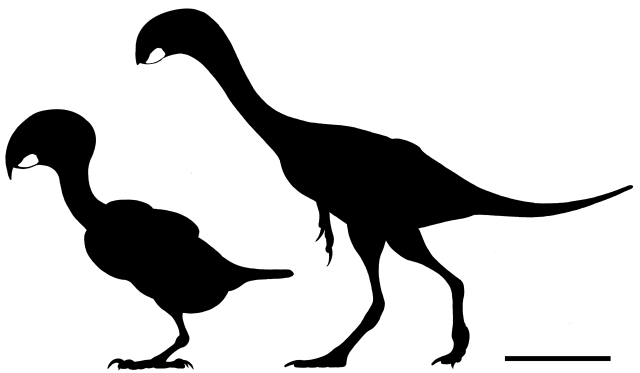 Revision of Waterhouse’s comparisons, with UCMP 143274 in white in silhouettes of a [skinned] psittaciform-like bird (including zygodactylous foot), and a small caenagnathid-like nonavian dinosaur. Scale bar is equal to 10cm.

There isn’t much difference between these in size, and that’s what’s so remarkable, because it suggests a remarkable conservation in body mass to jaw length regardless of differences in proportions. Of course, biologically, they are rather distinct.

There are many things the jaw represented by UCMP 143274 might be, and aside from birds or caenagnathids, the tantalizing possibilities of turtles, or pterosaurs, or even a croc suggest nonetheless than the animal must have been fairly small. I cannot imagine this animal being larger than 1m in length, or even half that, whilst I cannot imagine it weighing much beyond that of a small cat, maybe 10lbs (4.5kg). It would be a large bird, but a very small caenagnathid.

This entry was posted in Art, Paleontology, Reconstruction and tagged Birds, Is [blank] an oviraptorosaur?, Oviraptorosaurs. Bookmark the permalink.