What Else Happened? I – The Dawn Dryosaur

Ignoring Spinosaurus for now, paleontology came up with a few other announcements in the last few weeks. Some pterosaurs (gotta love them) but also non-theropod dinosaurs! They do exist, they are interesting, but they receive much less press. Over the next few days I will present small posts on each of these and get away from what does tend to be an overly theropod-driven blog and the hype around #SpinoGate.

A new ornithopod from Portugal, Eousdryosaurus nanohallucis. Biogeography of Portugal’s Late Jurassic (Kimmeridgian-Tithonian) Lourinhã region, Alcobaça Formation (upper Kimmeridgian), is roughly equivalent to the Morrison Formation of the USA, and the Tendaguru Formation of Tanzania. This has led to broad comparisons of the taxic compositions in all beds, including the referral of taxa from each to single taxic containers. Lately, it has been easier to split these taxa off as their own binomial species (or as genera-species couplets). But these taxa are nonetheless distinct from one another. Globetrotting clades haven’t varied much; in the late Jurassic, North America and Europe were fairly close, and Europe while mostly islands at the time, acted as a land bridge of stepping-stones into the north of Africa. And it is from there that many archosaurs known from the Morrison may have made their way to or from Tanzania. The Jurassic site of Oker in Germany also produced the dwarf brachiosaur Europasaurus holgeri, strengthening the intermediate position of Europe to the Americas and Africa. It is also possible that Europe was a side-step, as during the Early Cretaceous at least biogeographic cross-over between Africa and South America also occurred, which resulted in a pan-Atlantic American-African depositional basin wherein many croc species co-occurred on both sides. For more generalized info on this, Justin Tweet on his blog Equatorial Minnesota has more.

The holotype of Eoudryosaurus nanohallucis is a set of partial hindlimbs (SHN(JJS)-170) from a single individual and some hip bones, and are clearly of dryosaurid grade. The limbs are gracile, and appear to represent a transition point in the trend towards reduction from four functional toes to three, via the vestigialization of the first toe. Eousdryosaurus nanohallucis is fairly diagnostic: the tail vertebrae possess a small anterior spur at their base that likely corresponds to an ossified attachment for the interspinous ligament, a broad posterior brevis shelf of the ilium (which attaches the caudofemoralis brevis muscle to the hip); some features of the proximal tarsals (astragalus, calcaneum) show robust interlocking and a broad, rounded articular surface for the metatarsus + distal tarsals; a thickened, broad metatarsal V, and no apparent first phalanx of digit 1, merely the ungual. Numerous characters help secure its distinction from other dryosaurids. 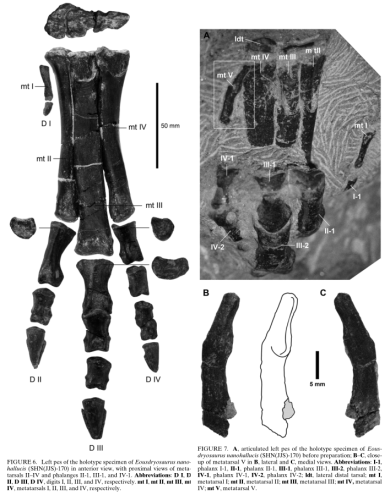 One peculiarity that jumps out as me is the preservation. Neither first toes are directly associated, the ungual is always associated with the proximal element, but the element is displaced ventrally and to the side in the unprepared pes (above, right) whereas it is show much more proximal in the right pes (above, left). A clear conchoidal distal end of the proximal element with a medial facet-like feature is a pair of features at odds with each other: the first is a hallmark of a functional phalanx, the other implies an articulation, a joint with the near metatarsal II, and is likely responsible for the referral to metatarsal I. However, this feature is unusual, with development of a functional ungual and loss of an intermediate phalanx, or transformation of the proximal phalanx into an ungual. The latter seems peculiar in that this would require a functional constraint to retain an ungual, yet its size and location makes this unlikely. Loss of intermediate phalanges can occur in birds, frogs, and lizards; and this reduction is responsible for the mammalian reduction from 2-3-4-5-n to 2-3-3-3-3, and as such makes this more likely to be the case. The retention of a functional ungual and a functional distal condyle for it implies to me rather than the proximal element, however reduced, represents a proximal phalanx, pdI-1, rather than MTI. The authors’ description isn’t really clear on its morphology.

[n1] Eousdryosaurus means “dawn Dryosaurus,” which bypasses the convention of using eo- abbreviation in favor of the longer, full eous (Greek, εοως); nanohallucis refers to the “tiny hallux,” the first toe and its apparent abbreviation to just an ungual.

5 Responses to What Else Happened? I – The Dawn Dryosaur