Here’s the skull of the anurognathid Anurognathus ammoni. This guy appears on the banner above — occasionally — to which I’ve granted nice, long filamentous integument, especially in front of the eyes. And there’s not a whole lot in front of the eyes…. 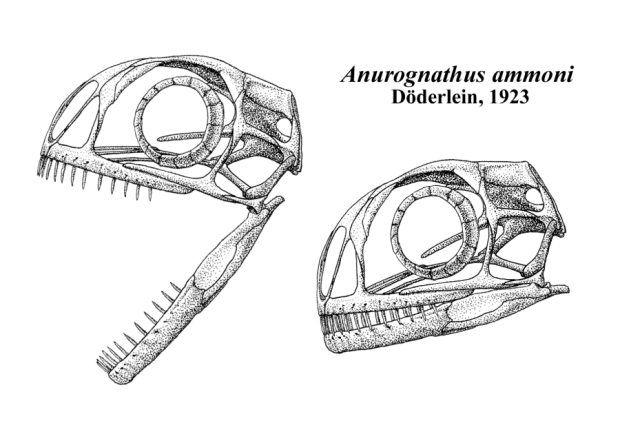 Since Döderlein’s original description, there have been only two serious attempts published to reason out the cranial anatomy and arrangement of bones of the holotype’s skull, crushed and scattered. The first, Wellnhofer’s 1975 treatment in a review of Rhamphorhynchoidea (paraphyletic version), helped establish the “very short skull” of this animal, a novelty among the slender, triangular skulls of all its relatives. The second, Bennett’s 2007 description of a second, smaller specimen which included a much, much more complete skull, has cemented the reconstruction of a face dominated by the orbit.

The head of Anurognathus ammoni is half orbit, one-quarter eyeball. 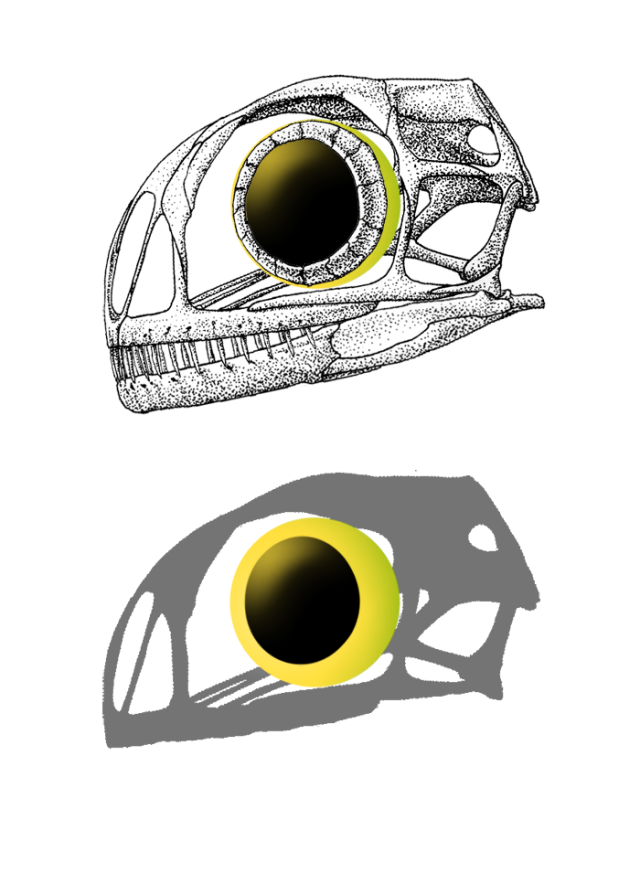 So, those are pretty huge eyes. And here I thought oviraptorids probably had big ones. But the more interesting thing is that for their size, the scleral ring seems fairly thin. I haven’t done the math, but it does seem to suggest that Schmitz & Motani’s (2011) hypothesis about relative diameters to active foraging time (or diel) indicates that Anurognathus ammoni had scotopic eyes, and was thus likely nocturnal. A further analysis, by Thomas et al. (2006), indicates that — for shorebirds, at least — mere eyeball size and proportions indicates diel, but that foraging with tactile capabilities does not affect eye size, nor is such behavior predicted from eye size. As it is, whether these pterosaurs used long filamentous “whiskers” as do nightjars is something of a untested hypothesis. I reconstructed the silhouette for this pterosaur, as will be visible in the banner (happy hunting!), to have enormous filaments sprouting rostral to the orbit, something the fossils do NOT indicate.

Aside from the bones of the skull, the eyes were probably the heaviest part of the head, and one might think that with such investment, there might be little else in the head to really devote a lot of energy developing — eyes are expensive organs! Thus, with a plate reduced to thin struts (not very visible in these images), a braincase smaller than the volume of one eye, and thin, fragile teeth in a jaw quite unlikely to be fused, I tend to think these animals may not have spent a whole lot of energy actually processing their prey in their mouths. It seems more likely that, as do frogmouths, nightjars and many, many microbats, this little pterosaur would have hunted on the wing, and caught and swallowed prey as whole as possible. It is also for this reason that I’ve forgone the typical interlocking rostral dentition, which almost everyone else tends to include, and simply pulled the lower teeth inside the uppers; really, it probably didn’t need to interlock teeth, as these animals were likely not holding on to prey in their mouths. Grab and swallow.

This entry was posted in Art, Paleobiology, Reconstruction and tagged Anurognathids, Pterosaurs. Bookmark the permalink.