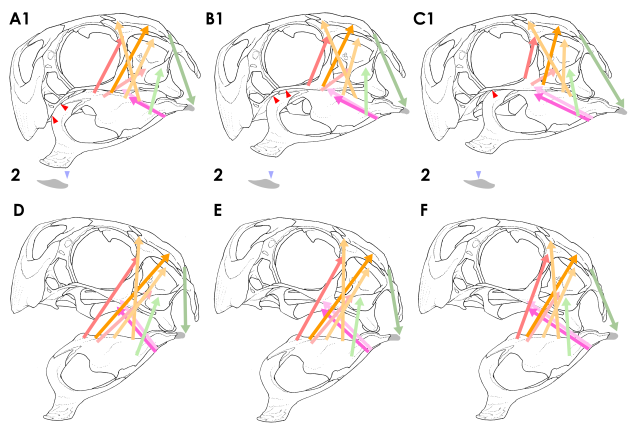 Muscle lines of action. Different muscles orient separately when the jaw is protracted (A, D), at “normal position” (B, E) and retracted (C, F). Perhaps interestingly, the position of the symphysis when the jaw is closed (A-C) is directly beneath the ventral “prongs” of the maxilla no matter how protracted/retracted the jaw becomes (blue arrows in “2” demonstrate relative position of prongs above symphysis). Red arrows in A1-C1 mark the rostral and caudal limits of the bony contact between upper and lower jaws.

Wait, you thought we were done? This is a short post, following parts one, two and three. The above image attempts to describe lines of action for major jaw muscles and directions of force (arrows). Jaw protraction and retraction does not take into account probable shapes and extent of the rhamphotheca, which at the least might constrain how for anteriorly the mandible may protract, but also its ventral extent. Examining lines of action helps describe the angles of muscles to jaws for analyzing force for beam analysis. This does not take into account relative contribution of muscles to force production, in which case the red-pink labeled mPst will likely represent some of the weakest muscles. Typically, the major temporal muscles are preferred, and they may be assessed as a unit (mAME group), or in combination with the palatal muscles (mAME and mPT groups).

This entry was posted in Biomechanics, Morphometrics, Paleontology, Reconstruction and tagged Jaws, Oviraptorosaurs. Bookmark the permalink.