“Toroceratops” Matters, as an Open Discussion

So there’s this debate, which I may have discussed — more than once, twice, or thrice — before, in which it is argued that the taxa Triceratops and Torosaurus represent young adult and old adult representatives of the same species. I’ve argued caution, discussed this with several of the proponents of synonymy and with its detractors, and overall enjoyed the debate. Whether the type species of Torosaurus, latus, is a synonym of one of the species of Triceratops is as yet unknown — the proponents do not make this referral, which is mandatory to conclude their containing “genera” are synonyms (especially when they themselves argue that latus “doesn’t exist”); being a synonym or not, or the status of Nedoceratops hatcheri (nee Diceratops), doesn’t actually matter in the long run to me. I’m more interested in the process than the product.

In February of 2012, the Yale Peabody Museum hosted a debate between Dr. Jack Horner — who advocates the synonymy of the taxa — and Dr. Nick Longrich, who works at Yale and is an opponent to this argument. Dr. Longrich and colleague Dan Field, along with Raymond M. Alf Museum‘s Dr. Andy Farke, have argued that not only is Torosaurus latus distinct from any Triceratops, that Nedoceratops hatcheri is an intermediate form, but also that the basic arguments from Jack Horner (of the Museum of the Rockies and Montana State University, where he teaches) and his former student Dr. John Scannella need to be borne out to be used. Needless to say, this debate is very interesting, especially in the latter section, and this is embedded below the fold.

Let’s put aside the heated back-and-forth between Drs. Jack and Nick for a moment: both are passionate men and invested in the science of their positions. In the posts I link to at the top of this post are any indication, I’ve come down heavy against Horner and Scannella, oh whom the latter has argued back his case on this blog, but not because of any deep-seated need to keep these taxa separate. Let’s also put aside the argument of Longrich in which apparent phyletic diversity can somehow trump the needed in-depth analysis of the material and assessment for variation and ontogeny among and within taxa. Both sides have made great points in their defenses of their own work, and I admirably support the process by which the authors are extending the debate in careful, reasoned papers.

Where I have stressed difficulties accepting a case is on the presentation of its data, or rather the lack of said data purporting things argued for. Horner and Scannella have, for example, stressed preservational regimes through various sedimentary types for articulation or otherwise, stratigraphic arrangement of specimens within the Hell Creek Formation leading to phyletic diversity at their ends (which suggests utility for other taxa), and preponderance of morphological data distributed among various specimens that conform to both taxonomic and ontogenetic distinctions between specimens, but which form a continuous cline. The problem is, as Longrich points out towards the end of the video, and which receives an answering “We’ve done that, too” from Horner, is that the data isn’t out there. We do not have it. He has it. To discuss data, one must make that data available, open, accessible, and comprehensive. One needn’t have to perform the study themselves to then find this information, or crawl back through the MOR’s files. Presumably, this information can be made available, hosted or “published” on Figshare or a number of other data-collecting sites, and which permit workers to examine the material. It can be hosted by the publishers of their next paper, with a supplemental framework, so that the data which is argued for is available. This, rather than attempting to counter an argument with a playground “Yes I did!”

The form should be that if one is trying to counter a claim, one must present the information that counters that claim, not merely assert it. This was my problem with the original “Toroceratops” paper, and it’s still there: The explicit information that indicates that Torosaurus latus, its type specimen, is a member of a specific species of Triceratops, is what is required to sink Torosaurus. It is not even enough to say that Torosaurus latus falls within variation between Triceratops horridus and prorsus, for we may just recognize the latter by its own “genus”; indeed, we seem to be teeming in purported “triceratopsin” ceratopsids, from Eotriceratops xerinsularis, Ojoceratops fowleri, or even Tatankaceratops sacrisonorum. Part of the problem stems from the lack of quanlification of variation, something which Longrich mentions in his paper with Field, and in his response in the debate in the video. It is Horner and Scannella’s assertion that this variation is, almost always, ontogenetic, and one might think that’s something one has to back up with solid data; especially their arguments about metaplastic reformation of bone shapes. I’m also rather put off with the assertions that Horner might be convinced if we found a baby Torosaurus. My response is: How would you tell? Might some of your specimens BE juvenile Torosaurus? This is especially true if the ontogenetic trend Horner argues for is true, but is exclusive of Torosaurus. How does one extricate that from the “Toroceratops” synonymy angle? 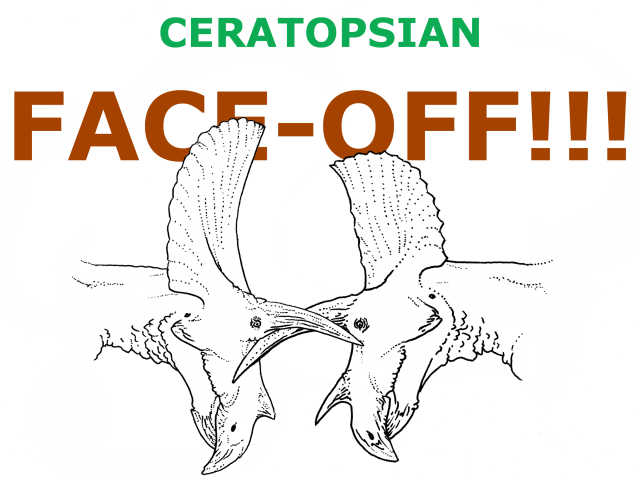 It is pretty simple:

If I were to make a conclusion based solely on the information presented in the papers discussed in these posts, I would likely conclude that the strict variation suggests “Torosaurus” is distinct from “Triceratops.” I would not so readily support Horner’s argument, because the assertions for ontogeny are, as they were with Pachycephalosaurus (first link above), admittedly shaky. We don’t have the data yet to make a more informed decision independently. Horner and Scannella mention many hundreds of specimens, and that is wonderful, but for all their histological sections, these features (as argued by Longrich) have to be put into context, and there’s little of that. We don’t know a lot about dinosaur ontogeny and its variation, especially its potential evolution in small clades. We also have no real basis for the rather dramatic and extreme dimorphism between “Triceratops” and “Torosaurus,” where the former “grows” into the latter in a mere year or two, right as they hit “full maturity,” and right before senescence or death — well, outside of insects. No bird or reptile we have so far shows such extreme morphological disparity in such a short time span, and we might want to consider this caveat and present our context first.

I do not disagree with Horner and Scannella, and I don’t necessarily agree with Longrich, Field, or Farke; rather, I feel that if the data itself cannot tell the tale, if the interpretive story crafted by the authors has to lead me there, then the data mustn’t be very strong. And if isn’t — yet — we shouldn’t be making such sweeping conclusions.

With all due respect to the principles involved, thank you for reading.

15 Responses to “Toroceratops” Matters, as an Open Discussion