Regardless of interesting things about trionychid turtles, there are odd things about other turtles that bear concern. For now, this is is a quick update on my bird/turtle beak morphologies study, here showing off the full jaw with rhamphotheca of Chelus fimbriatus, the matamata.

Large, blobby soft-tisue aside, my focus was on the bony jaw and the rhamphotheca, the keratinized beaky tissue directly associated with the oral margin involved in triturating food. The matamata is a specialist, though, with a bizarrely flattened and laterally expanded jaw and behavior known as ram-suction feeding: 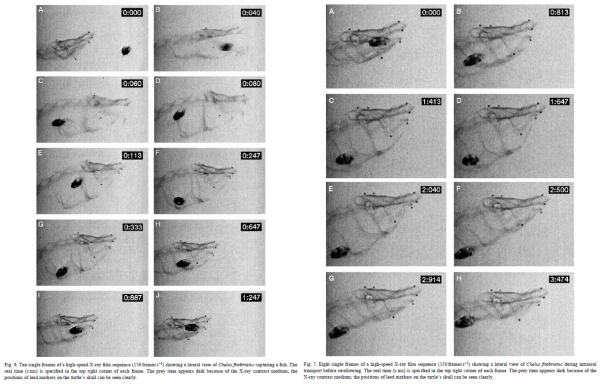 Essentially, rapid depression (opening) of the jaw during a forward strike of the head produces an extremely localizedsuction zone within the mouth, reducing chances for the prey animal to escape. Almost no oral processing occurs, and as a result matamata have slender rami on their rhamphothecae, rather than broad platforms as in Caretta caretta.

Update: Cleaner version of the image is now included below.

Here is the mandible of Chelus fimbriatus (matamata), shown from left to right without the rhamphothecal sheath, with it, with the sheath isolated, and with the outline of the sheath underimposed on the mandible, so as to describe the disparity in bony and rhamphothecal shapes. The rhamphotheca in the matamata is fairly thin, and rounded on its “triturating” surface, largely due to the relative lack of use of the beak in acquiring prey: the matamata swallows prey, instead — generally.

This entry was posted in Biological Comparison, Biology, Reconstruction and tagged Beaks, Turtles. Bookmark the permalink.