Skull of PIN 3907/3, referred to Avimimus portentosus, slightly modified by the holotype PIN 3907/1. The skull may not belong to the same species, as it is 20% smaller than the type, but is fully fused while the type is considered to be partially unfused, and therefore possibly juvenile or a different species entirely.

Edit: Please note that this skull is a reconstruction I created nearly 15 years ago. It is based on outdated information, largely Kurzanov’s original line drawings and some very tiny photos. You SHOULD NOT use this skull, as it is both outdated and likely highly inaccurate, to say nothing of the arrangement of the bones of the snout and palate. I have resisted updating this because of the paucity of actual data regarding the skull accompanied by detailed photographic or personal examination. DO NOT use this skull save as a citation for what is wrong about it.

The skull of Avimimus portentosus is somewhat confusing, and I’ve been floating the idea that PIN 3907/3, the skull depicted here and the only one actually depicted, is potentially a different taxon from that of the holotype, which is represented by a partial skull cap: 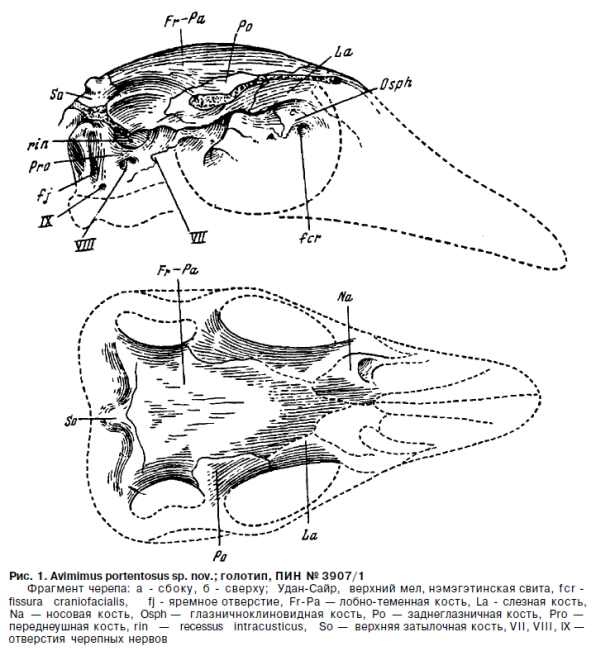 Skull of PIN 3907/1, holotype of Avimimus portentosus Kurzanov, 1981. Skull is given as measuring 50mm long as preserved (occiput to “nares”) with an inferred circular orbital diameter of 25mm. From Kurzanov, 1981.

Compare this to a more recent reconstruction of the 3907/3 skull, where I refrained from the highly dramatic retraction of the external bony nares and the further rostral placement of the antorbital fossa/fenestra, which is bizarre to say the least. Below, the skull has been fitted far closer to the original, and less dramatically modified to make the bits “fit.” I have still been highly speculative about the pieces missing between the rostrum and braincase fragments, and thus the length of the jaw; however, I highly doubt the skull would get longer, and rather think the skull could be a bit shorter. (This is the same skull that appears here.) 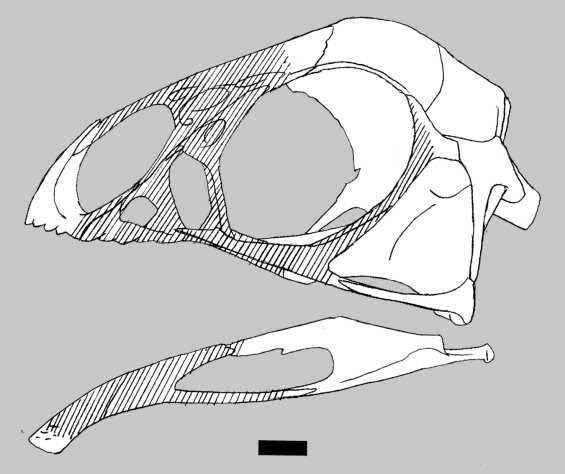 I’ve refrained from speculating too much on the strange cranial anatomy of the skull, especially the peculiar aspects that have been ascribed to the premaxillary fragment. However, despite implications that pneumatic features exist in the narial fossa, this is likely not an issue for an oviraptorosaur, as diverticula extending from the paranasal sinus system may have extended onto the premaxilla lateral surface.

Extreme fusion of the braincase or obfuscation through preservation and lack of a modern redescription may obscure more refined details, and this skull is in dire need of a thorough discription. It may support hypotheses such as that the “doming” of the frontals are caused by large internal frontal sinuses as exist in Citipati osmolskae (Clark et al., 2002). Extreme pneumatic expression in the skull of a small oviraptorosaur, a putative non-oviraptorid at that, may be even more diagnostic of this species; and its lack in the holotype (something I also hypothesize from the preservation, and would dearly love to verify through CT of both skulls) appears to confirm this, as well.

The final interesting aspect is that it is almost exclusively the skull (this skull) that has suggested Avimimus portentosus was closer to oviraptorids than other taxa. If the two skulls belonged to two different animals, it may very well imply that PIN 3907/3 is a small, oviraptorid-ish species. Further specimens ascribed to as “Avimimus sp.” or more certainly to portentosus have been discussed in conference proceedings and talks, such as at the 2000 and 2008 SVP meetings by Drs. Watabe Mahito and Phil Currie, but have not been described (Mickey Mortimer’s Theropod Database has a list). It would certainly be interesting to see what, if anything, these specimens have to say about the affinities of the referred material.

This entry was posted in Paleontology, Reconstruction and tagged Oviraptorosaurs. Bookmark the permalink.

2 Responses to When Bird-Immitation Goes Bad