What follows is slightly familiar, but brief. I posted earlier on the rhamphothecal covering in a turtle, Caretta caretta, the loggerhead. While investigating the plausible beak structure base don superficial osteological markers in connection to oviraptorosaur work, I could not just focus on turtles, but also birds. These form the bracketing taxa by which oviraptorosaurs would be assessed to determine comparable tissues, as no other living animals have rhamphotheca in this form. That they are made from different types of keratin may or may not be relevant, as the fundamental link or lack thereof has yet to be explored. So we start with the hypothesis that the two groups do, in fact, form a viable bracket into which we can place oviraptorosaurs.

For aesthetic reasons, I chose a parrot, or more specifically, the Yellow-Crowned Amazon Amazona ochrocephala (or sometimes Amazona ochrocephala ochrocephala, depending, and given the sources were anatomical specimens and not from recently sequenced studies which support some rather fundamental splits in the ochrocephala complex, it might be some other species of Amazona entire). Ignoring the issue of phylogenetic species versus biological ones, or the nature of species complexes and how far you can split a “genus,” I present a comparison of the Caretta and Amazona jaws (not to scale): 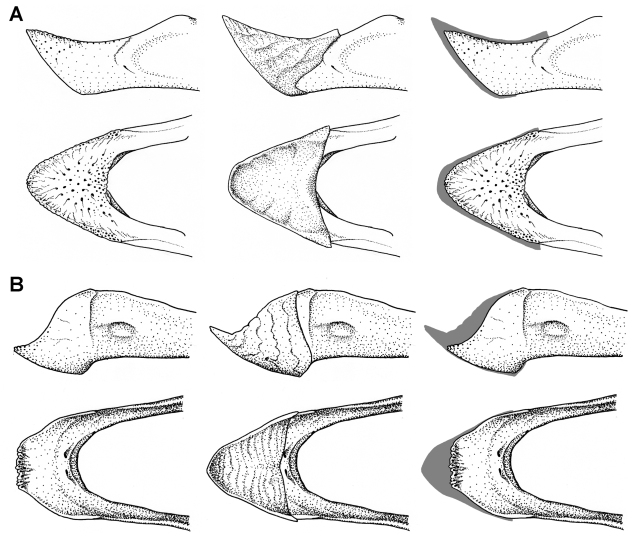 I will certainly be expanding this, adding new turtles (such as Trionyx and Macroclemys, and Dermatochelys) to the mix, as well as a range of differently-beaked birds for which the rhamphotheca is either more or less extensive, especially the duck for which distinct osteological structure departs from “normal” morphology (to accomodate Herbst corpuscles), and for this Anas platyrhynchus (mallard) is pretty uniform.

The above images remain incomplete, as there is a sagittal section for both rhamphotheca and jaw, and one for the ventral aspect, and hope this can clearly reproduce the apparent and actual morphology underlying the rhamphotheca in these animals.

Of course, it should be noted that the margin of the rhamphotheca does not perfectly follow the jaw margin, although they tend to be close in correspondence along the rostroventral surface, and along the posterior tomial rim. The rhamphotheca diverges in shape from here and can create shapes or aspects that have nothing to do with the underlying bone (ripple-like ridges in some parrot beaks, corrugations in hornbills, etc., as well as crenelation of the tomial margin), and this is what fascinates me the most. How am I to infer the ultrastructure of the beak of an animal with only its bony jaw?