You have to hand it to a creature that had bigger teeth on the lower jaw, than it does on the upper.Epidexipteryx hui, named for Hu Yao-ming and for the two pairs of long feathers extending from its tail-tip (“Hu’s display feather”) [n1], is a small animal, about 26cm long from tail tip to snout tip, and was at least another 19cm longer with the inclusion of the tail feathers (which are incomplete). 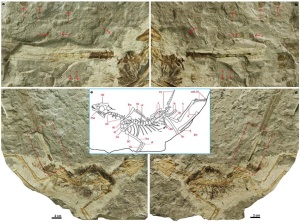 As a relative of the scansoriopterygids, it comes with a few peculiar features, including extremely long arms, a broad and short foot with large forward-facing hallux (first toe), and a manus with a longest third (outer) finger than the rest. This is the case with Scansoriopteryx heilmanni (Czerkas & Yuan, 2002) and its likely synonym Epidendrosaurus ningchengensis (Zhang et al., 2002), both of them described from non-adult material, likely juveniles.

Epidexipteryx hui is based on a specimen much larger than the others, although it comes from the same sediments as Epidendrosaurus ningchengensis does (Zhang et al., 2008), the Daohugou beds in the Late (or possibly Middle) Jurassic. The issue of Scansoriopteryx heilmanni is more complicated, as the holotype specimen was acquired by private collectors and sold in the United States, and lacked provenance data; the slab resembles material from the Daohugou beds, and it is assumed that because of the difficulty discerning Epidendrosaurus ningchengensis from it, they should be synonyms. I disagree, largely due to the fact that these features may similarly fail to discriminate Epidendrosaurus ningchengensis from Epidexipteryx hui. The only distinguishing feature is a poorly preserved impression of a mandible in the former, and while it preserves a rostrally-restricted set of dentition, this jaw is broad and rounded, and seemingly at odds with what is preserved in Epidexipteryx hui, and comparison to the skull in Scansoriopteryx heilmanni.

However, based on the teeth, some peculiarities from what we know of the other scansoriopterygids arise. Most certainly, there’s the size discrepancy between upper and lower teeth, with the lower teeth very much larger than the uppers, a feature in mammalian hypsodont dentition called “anisodonty.” While the elongated “fangs” of the mandibular dentition cannot be compared to mammalian teeth, the heavy size discrepancy is extremely notable. 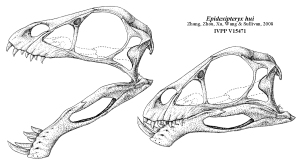 Skull of IVPP V15471, holotype of Epidexipteryx hui Zhang et al., 2008. The skull is shown in jaw gaping and jaw closed positions. The dotted line represents palatal bones which, while present, are virtually indistinguishable in shape, and thus are generalized; scleral ossicles, more discernible, are omitted for clarity.

The upper and lower jaws show a morphology that is, to say the least, unique to dinosaurs and (for the most part) birds in general: they are rostrally curved away from one another, with the mandible decurved and the rostrum curved slightly upwards. The bones of the jaws are deep, and the preservation as shown above indicates that the roots are broad and deep, extending nearly the entire distance from the dentigenous margin to the possible limits. In the premaxilla, the first tooth alone bears a root that extends into the ascending, posterodorsal or nasal process, but the crown is short with a high aspect (nearly 2:1). All teeth are recurved, seemingly carinated, but unserrated, and some posterior mandibular crowns are slightly constricted at the base, although this may be due to protrusion of the root from the alveolus that contains it.

Lida Xing’s Epidexipteryx restoration, with a closeup of the teeth.

No other dinosaur, basal birds included, have teeth like this, and it is something to say that virtually no archosauromorph reptile does, either. When closed, as preserved, the teeth seem to enmesh or inter-finger, a feature found in long-toothed crocodilians and in pterosaurs, and it is inferred for Masiakasaurus knopfleri (Sampson et al., 2001, which I will be getting to in this series, especially its interpretation following Carrano et al., 2011). Enmeshing lower teeth, protruding rostral crowns, and a general “hook-ness” of the teeth in lateral view is found in some taxa, but they are not reptiles: Mammals.The image above infers that the second pair of teeth were longer than the first, forming “caniniform” teeth, although this is not preserved.

In particular, Daubentonia madagascariensis, also known as the aye-aye, which will also be featured in this series. Below is from Quinn & Wilson (2004):

The consideration of alluding to the dentition of the aye-aye as well as to the fingers (as in “the aye-aye dinosaur”) in scansoriopterygids cannot be entirely forgiven, but these are “easy” comparisons to make. It is also something of a false allusion, but I will get to that eventually. I’ve called these small theropod dinosaurs “nitpickers” because of the dentition of Epidexipteryx hui, in that they are rostrally concentrated into a V-shaped array of twin combs, seemingly suited to “picking” at “nits,” or any variety of insects. In fact, they’ve been argued to be insectivorous due to this comparison, although little specific data has been raised to support it. Nonetheless, they remark on the unique biology of the animals, accentuating the attenuated third digits.

Previously: The many, small and homogenous teeth of Zanabazar junior, the “Thunderbolt of Wisdom.”

Up Next: Do they dream of algal sheep? Triassic palate mashers.

[n1] epidexi (Greek, επηδέζια) is derived to mean “display,” and literally translates as “to the right,” a reference to an action in which a narrator or displayer indicates something to be seen “on the right,” and is thus an allusory derivation of the literal term.

This entry was posted in Biology, Paleobiology, Paleontology, Reconstruction and tagged Scansoriopterygids. Bookmark the permalink.