This isn’t really that much of a post — for now. I’m preempting a longer unprepared post on the topic, which will not detail any views I may or may not have on the purpose of filamentous integument in a small group of ornithischians. But that’s what this post will talk about.

Ornithischians with integument are not rare, as skin impressions are known for several taxa (mostly hadrosaurs, especially some incredibly well-preserved “mummies” from North America and Europe (see dalla Vecchia, 2009; Murphy et al., 2006), but unusual structures in impressions tend to garner attention, including the presence of a midline row of “crenellations” or a divided frill, or the presence (or not) of a “nuchal” structure linking the base of the neck directly to the back of the skull and slinging the neck beneath it, down to the covering or potential “pelage” of ornithischianhs Down Under, where the environment was at, around, or below the Antarctic Circle and thus pretty durned cold even when it was warmer in the Jurassic and Cretaceous (see Rich & Vickers-Rich [1989] for an introduction on this topic). 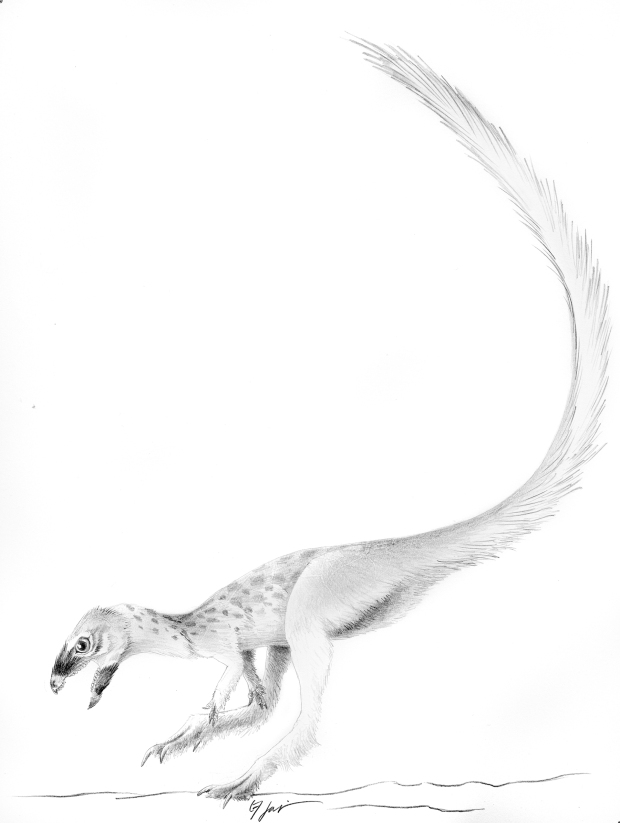 Aussie ornithischian, Leaellynasaura amicagraphica, restored with a ridiculously long tail that could be shorter than what hasn’t been described.

The largest indication for any type of non-squamous integument in ornithischians are rooted, not in ornithopods like Leaellynasaura amicagraphica, but in marginocephalians like Psittacosaurus (sp. unidentified or indeterminate; see Mayr et al., 2002) and Tianyulong confuciusi (Zheng et al., 2009). While debate has arisen over the interpretations of Mayr et al. (see Lingham-Soliar, 2008, and more discussion and attempted foiling of TLS’s arguments here), they have mostly been held to by non-specialists as the material preservation is identical to preservation in theropods for which the integument has not been doubted (e.g., NGMC 91, but not Sinosauropteryx prima, see Lingham-Soliar et al., 2007). 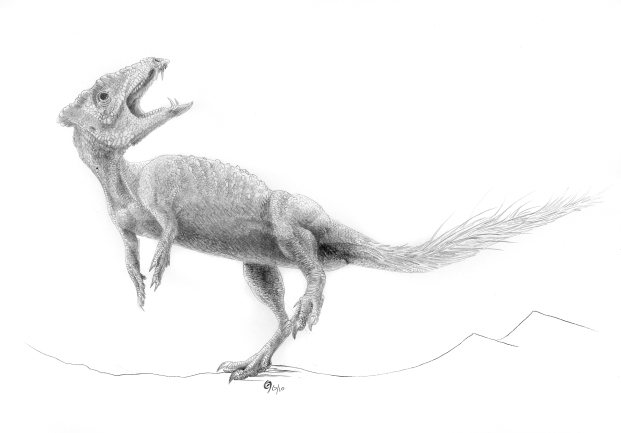 One of the more problematic issues involving inferring filamentousw integument is that some taxa may simply not have it. The only known integument that isn’t squamous in ornithischians in filamentous and appears only into two taxa, both of which are marginocephalians. While one, a basal ceratopsian (Psittacosaurus sp.) suggests basal marginocephalians possessed this condition, it requires that the other taxon, Tianyulong confuciusi, is also a basal marginocephalian, but not a basal ceratopsian (restricting the integument to basal Ceratopsia, and not to Marginocephalia); but if Tianyulong confuciusi is a pachycephalosaur, or basal to Marginocephalia (suggestions linking it to Heterodontosaurus tucki, but not to Marginocephalia are also useful) it expands the potential basal condition more basally within Ornithischia. This latter option has implied that the integument links theropods and ornithischians, thus all of Dinosauria, and might link Dinosauria with Pterosauria. But I have no means to even remotely assess this hypothesis, nor do I think the fossils permit inference this broadly.

4 Responses to Ornithischians with “Dinofuzz”