And not one of them is a theropod. Oh, you’re thinking of Incisivosaurus gauthieri? It’s clearly a bunny-toothed dinosaur.

What follows is a discussion on one of my favorite topics: The dentition of Goyocephale lattimorei.

Ooo, shortest paragraph before the jump.

Goyocephale lattimorei [1] is a relatively interesting ornithischian dinosaur. As a basal member of the Pachycephalosauria, it exhibits features that are common, if not universally pervasive, to this group: extremely short forelimbs, dorsoventrally thickened skull roofing bones (parietal, frontal) along with thickened marginal skull roofing bones (supraoccipital, squamosal, postorbital, lachrymal), presence of accessory ossifications between the lachrymal and postorbital fused to form part of the orbital margin, and ornamentation in the form of little nodes on the squamosals and parietals [1]. Systematically, is it nearly the most basal taxon in Pachycephalosauria; this is due largely because of its teeth, which are numerous and heterodont (i.e., they are distinctly differentiable along the series; “heterodonty” is a term I will get to in a later post).

While not much of the skeleton is known, the skull is well-enough preserved although poorly represented (one specimen, and virtually no detailed photographs since originally described). It is nonetheless fascinating, and Perle et al. [1] had much to say on it. The entire skull roof, and virtually the entire braincase is known, as is the quadrate, and the “cheek” bones (jugal, quadratojugal), and the oral bones (maxilla, premaxilla), along with the lachrymal (sort of in the “middle” of these sections of the skull. Portions of the dorsal maxilla and premaxilla are missing, which makes the contacts between the skull roof and nasals with the lower half of the skull somewhat unclear. Despite this, one can still find that the skull is very triangular in side view, and relatively shallower than the skulls of other pachycephalosaurids like Homalocephale calathocercos [1,2] or especially the “stegoceratine” or “pachycephalosaurine” forms [3,4].

One of the more significant, and the most highly noted, feature in Goyocephale lattimorei (when the taxon is noted at all), is the presence of large premaxillary teeth. Unlike other pachycephalosaurs, these teeth are particularly large and recurved: the first two premaxillary teeth are broadly triangular, labiolingually compressed, and have a slight hook to the apex (and are unserrated); the third premaxillary tooth, like the others, has a constricted root, but unlike them is much longer, more conical in shape, and serrated on its distal margin. It shares this last condition with Heterodontosaurus tucki [5,6], a taxon which has variously been posited to be basal or ornithopodan ornithischians (which exclude pachycephalosaurs, and the generally prevailing view) [1,2,7], but also basal to the Ornithopoda/Marginocephalia split [8,9], or even as a basal marginocephalian itself [2,10]. New material appears to help affirm the marginocephalian connection, as shown here, but this is undescribed.

Astute readers will note that I produced two Weekly Pictures which begged the question: What are they? In Week 5, I asked you to identify the non-theropod denticles; these would be A, and they pertain to Goyocephale lattimorei. One should certainly note that they are slightly rounded, but very rectangular, and slightly hooked. In Week 6, I posted a series of images of teeth, and among them were two teeth (I and J), which pertain to GIN 100/1501. Not shown was the first dentary tooth, from which the serrations in Week 5 come from, and which is larger than the third premaxillary teeth. Like Heterodontosaurus tucki, then, Goyocephale lattimorei has both premaxillary and dentary “fangs” or “tusks,” and they are serrated.

This places an unusual amount of emphasis on what is a particularly rare feature in ornithischians: It occurs (as far as we know) only in Heterodontosaurus tucki and Goyocephale lattimorei, and in reduced, unserrated form in the putative heterodontosaurid Fruitadens haagarorum [11]. With some attention to the particularly marginocephalian-like Tianyulong confuciusi [9] the facial anatomy of “heterodontosaurids” and that of basal pachycephalosaurs become increasingly convergent; this is exaggerated by the similarities to basal ceratopsians like Auroraceratops rugosus [12] and Yinlong downsi [9], which exhibit large premaxillary teeth, while serrated premaxillary teeth are known only in Heterodontosaurus tucki [6], Goyocephale lattimorei [1], and Chaoyangsaurus youngi [13]. 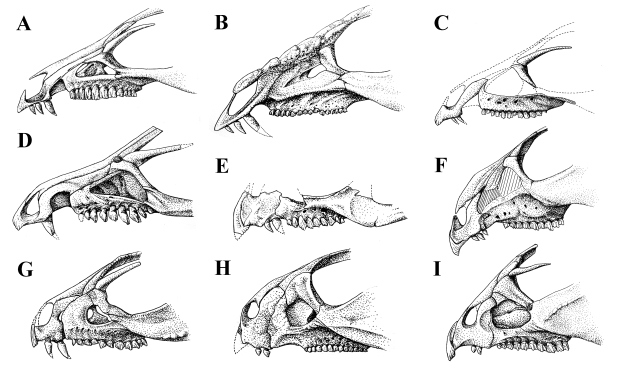 Several hypothesis have been put forward concerning the phylogeny of these taxa, as listed; If true, most of these phylogenies would produce a complex of basal ornithischian grade taxa without sabre-teeth giving rise to convergently sabre-toothed forms, specifically heterodontosaurids and basal pachycephalosaurs. This leads to some questions:

Update: Richard Butler notes in the comments that I had mis-proportioned the teeth in Heterodontosaurus tucki and Goyocephale lattimorei; I had incorrectly restored the Heterodontosaurus third premaxillary “fang” too long, but I stand by the length in Goyocephale, and have modified the second to conform to restoration in Tianyulong confuciusi where the incomplete tooth is shown as incomplete, while in Heterodontosaurus I’ve shortened the tooth. I’ve also modifed the “snouts” above to include Abrictosaurus consors, Liaoceratops yanzigouensis, and Archaeoceratops oshimai.