Occassionally an author will suggest that recovery of a specimen is representative of a new species, and this is generally true. The problem with this type of nomenclatural act is that when it is required on the part of the author to “downgrade” a known taxon to do it. One can find a variety of reasons to dispense with reasonable certainty as to the identity of the new material and how it can apply to the old. When the old gets a name, and the new one seems like it should be named, conventionally one refers the new material to the old.

Trickier still is when the original material is very much incomplete, scrappier, or otherwise limited in how much information can be garnered from it. Generally, this is a matter of perspective.

Skeletons of Suchomimus tenerensis (top) and Baryonyx walkeri (bottom) compared. Note the ridiculous disparity in length between the authorship lists.

This requires a disclaimer: I do not mean anything bad by Paul Sereno for his nomenclature, and I’ve discussed this with him and some of his students, and he’s been very forthright on his purposes. But the quality of the concept of synonymy or non-synonymy requires that the reason for the issue be discussed.

In the late 1960’s, a team of French geologists and biologists were scouring the Gadoufaoua region of Niger, with its mid-Cretaceous exposures, for fresh new fossils, uncovering things like Ouranosaurus nigeriensis, a sail-backed iguanodont; Nigersaurus nigeriensis, a small, short-necked sauropod; Sarcosuchus imperator, a very large crocodilian; and basal ceratosaurian, abelisaurid, and allosauroid taxa which have been given names of their own. Among the material recovered were two partial premaxillae and associated pieces of the upper and lower jaws [2]. In 1998, they were named Cristatusaurus lapparenti [3]. This followed the description of a large, croc-snouted theropod from the Wealden of Surrey, England [4], Baryonyx walkeri. Initially, it might be concluded that the premaxillae from Niger might belong to Baryonyx, and indeed, Charig and Milner, in describing the osteology of their taxon [5] assumed just this. But publication of the material as Cristatusaurus lapparenti involved a feature which the authors were reasonably certain could distinguish the Nigerian material from the English: The dorsal midline of the premaxillae bear a broad ridge, distinguished from the sloping sides of the premaxillae by a shallow but distinct sulcus [2].

Sereno et al. [1] explicitly regarded Cristatusaurus lapparenti as being a nomen dubium (a generally ambiguous term) and erected material found several years earlier, including large premaxillae, as a new taxon Suchomimus tenerensis. It is not difficult to regard the taxa as being similar; while [1] certainly downgraded the French taxon on the basis of its “dubious” status, other authors have been more careful: [6] argued there lacked any evidence for more than one taxon of spinosaurid at Gadoufaoua, and placed all of the Baryonyx-like taxafrom Niger into one species, Baryonyx tenerensis. This ignores that lapparenti has priority over tenerensis by several months, so that in the case that if theywere they synonymous (i.e., they could be referred to one another and therefore not nomina dubia), lapparenti would be the senior name. Peculiarly, while authors have followed this, they have sunk one name in violation of priority, such as [7] where tenerensis was held over lapparenti in the combination Baryonyx tenerensis.

Other authors have simply subsumed all of the baryonychine taxa into one taxon, Baryonyx [8,9], but have been less forthcoming on the specimen label to attach to these taxa, or have left all the species names equivalent. Nonetheless, as pointed out by Mortimer [10] the premaxillae from Gadoufaoua are hardly dubious, and the premaxillae decribed by [1] are identical if but for their size and variation in alveolar size. I would not consider this distinctive, but this is because I’m biased on the topic of tooth-based variation. 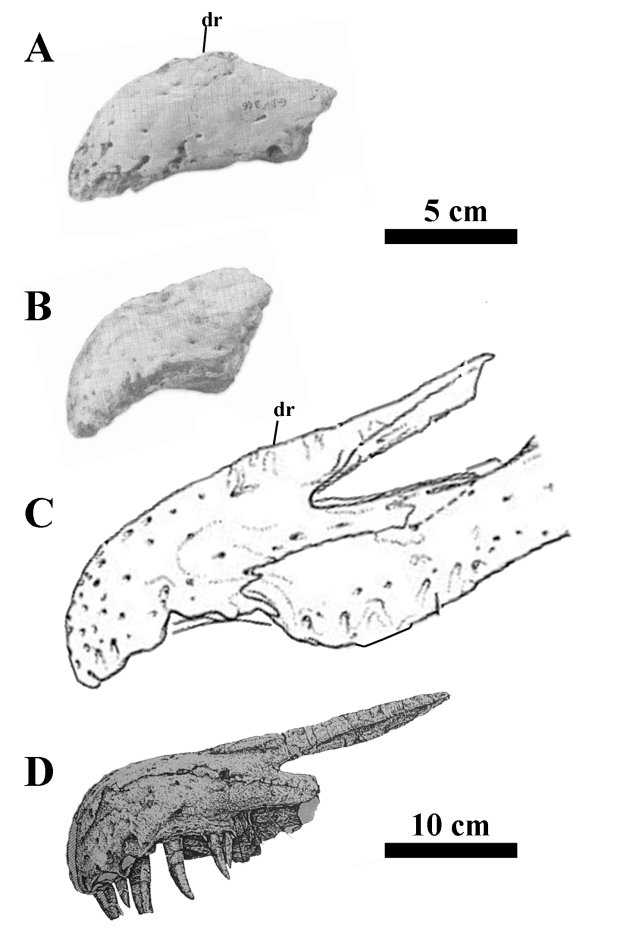 Premaxillae of baryonychine spinosaurids. A-B, Cristatusaurus lapparenti: A, MNHN GDF 366, holotype of Cristatusaurus lapparenti (in part), B, MNHN GDF 365, referred specimen. C, MNN GDF 500, holotype of Suchomimus tenerensis. D, NHM R9951, holotype of Baryonyx walkeri. The first scale bar is only for A-B, the second only for C-D; premaxillae have been rotated so that the posterior half of the dentigerous margin in horizontal, accentuating curvature and relative alveolar depth. Abbr.: dr, dorsal ridge. A-B after ref. 3, C after ref. 1, D after ref. 4

I highlight this case because, as it happened, referring more complete material to less complete material often involves making subjective decisions regarding the original material, and if there are names attached, the authors may tend to displace the taxa to erect new ones. The argument here is that they simply do not regard the premaxillae from Gadoufaoua as substantive enough, and therefore dubiously, regardless of the presence of features that make them explicitly diagnostic. The problem is that they may not be diagnostic enough, and this is a perspective of taxonomy that has a complex and historically long history. As I said here, the degree to which a specimen varies from another may seem different from one author to the next. When nomenclature is based on such variation, we must be cautious that we set our ducks in neat rows (as the addage goes) or else one of them may be lost, and we fail at our intended task.

Thus, my opinion has been complex:

1) If the limit of diagnostic utility is the mere presence of an autapomorphic feature, then Cristatusaurus lapparenti is valid, and Suchomimus tenerensis must be compared to it favorably to exist.

2) If the limit of diagnostic utility is based on how much material is present, we are no better off now than we were before Sereno et al. produced their nomenclature, as we have not determined where the bar is for how much is enough and how much is too little. Under this scheme, we’d subjectively aver that Cristatusaurus lapparenti is not valid, and that Suchomimus tenerensis is, simply because a premaxilla with partial dentary is less complete than a complete premaxilla and maxilla.

3) If the presence of a suite of features that can distinguish any amount of material produces an explicitly unique element, even if this element is very limited in extent, and this is valid for nomenclature, then any tooth-based taxon and more can be considered valid; any form of variation at this level becomes fair-grounds for forming taxonomy. In this case, both Cristatusaurus lapparenti and Suchomimus tenerensis would be valid because they differ in an explicit, alveolar manner. But fair warning: any further premaxillae that show up with a variable alveolar pattern can permit them being the basis of further taxonomy.

It is almost certainly likely that virtually all authors would regard lapparenti and tenerensis as the same taxon, but they regard the former differently due to various reasons, most certainly points 2 and 3 above.

This entry was posted in Paleontology, Philosophy, Taxonomy and tagged Spinosaurids. Bookmark the permalink.